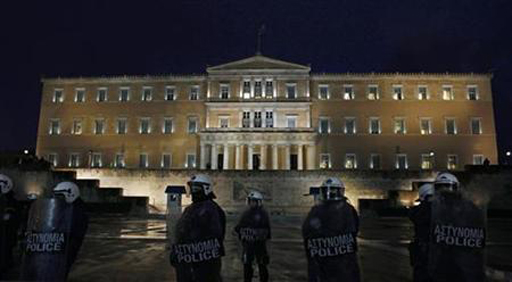 Constitutional issues relating to the eurozone bailout have again been raised by the German constitutional court in Karlsruhe.

Reuters is reporting that the court has ruled that a nine-member parliamentary panel set up to approve urgent action on the European Financial Stability Facility was "in large part" unconstitutional, demanding that decisions of the type made by the panel should be referred to the 620-strong Bundestag or the 41-member budget committee.

Similar issues were raised in November last year, and while these rulings are going to hamper Merkel's ability to railroad changes through the system, and one can only speculate as to whether this will strengthen the administration's determination to curtail the powers of the constitutional court.

However, this particular event many only be of short-term relevance, as the EFSF is to be replaced by the European Stability Mechanism in July, and the game may then have to start all over again.

No sooner does one gets to grips with one issue, though, another and then yet another crops up, in a never-ending kaleidoscope of activity which defied understanding. Here, the crise du jour seemed earlier to be the downgrading of Greece's credit rating to "selective default", but even that has had less impact than might at first have been expected.

Averting catastrophe is the ECB, which is leaning on the national central banks to provide "emergency liquidity assistance" (ELA), until the €35 billion-worth of support from the EFSF can be mobilised.

Meanwhile, a eurogroup summit scheduled for Friday has been cancelled, apparently at the behest of Germany, which is unwilling to discuss the single agenda item – increasing the funding for the so-called "firewall" of the ESM.

The European Council, set for Thursday and Friday, is nevertheless going to go ahead, and there will doubtless be discussions in les couloirs, triggering much media speculation.

However, it seems to me, with even ZeroHedge somewhat at sea, we are back in a trench warfare situation, where nothing much is expected to happen in the foreseeable future. The time is not yet right for another major crisis – we are suffering from crisis fatigue and need a break.