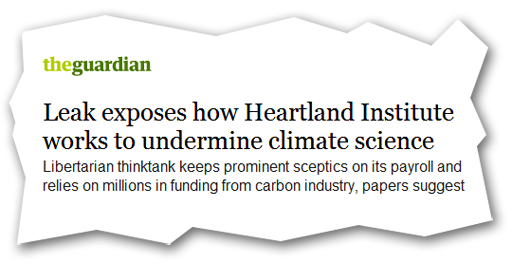 The Guardian seems to think (if it can ever be accused of such a process) that the Heartland Institute's $1.25 million fundraising target for climate "denial" is a big deal. It is strangely silent, though, about the $100 billion-plus - five times the cost of the Manhattan Project - expended on the promotion of climate change dogma.

However, we can understand their concern. Given the disparities in scientific credibility between the two sides - for instance, here - and the need for the warmists to propagandise, the extra amount is required to overcome the inherent weaknesses in the warmist case.

But there can be no greater illustration of the weaknesses than that fact that the warmists feel threatened by the tiny (relatively) sums contributed to the "deniers". I suppose they feel that, in equivalent terms, the funds are effectively level-pegging.