The disease of incompetence 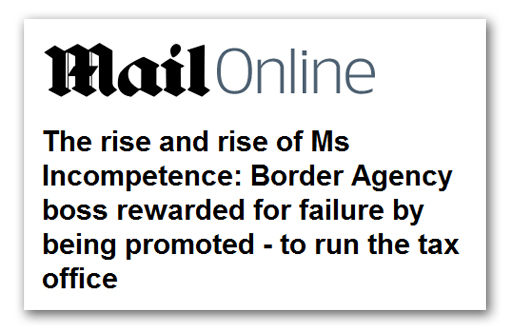 The resignation of Cynthia Bower, the head of the Care Quality Commission, says the Failygraph, would have been merited even without its exposure of the scandalous failings of the abortion system.

But only up to a point, Lord Copper. This ghastly woman came (once again) to notoriety in June last year, over the Winterbourne View residential hospital scandal. Before that, Bower - on a salary in order of £215,000, more than the prime minister – had been chief executive of Stafford NHS Trust, where she had presided over utter catastrophe.

But despite this appalling performance, in June 2009 she was given the prestige appointment as head if the Quality Care Commission, where she has proved herself to be, yet again, an egregious failure. By any measure, this woman should never have been given the job in the first place.

The worst of this, though, is that this is far from the only case where failure has been so handsomely rewarded. More recently, we see the civil servant who presided over years of chaos at the UK Border Agency promoted – to run the tax office (above).

This is Lin Homer, who was paid almost £1 million in salary and bonuses over four years as the first chief executive of the beleaguered agency, and is now rewarded for her incompetence with another highly-paid, prestige post.

Is this the disease that is going to bring down civilisation?