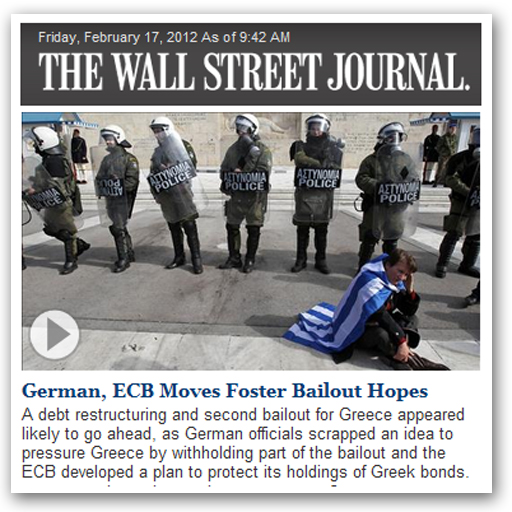 Pulling together the disparate strains of events, there is appearing – as one of our forum members remarks – an extraordinary divergence in reports on the impending (or not) Greek collapse - some optimistic and some pessimistic.

Leader of this morning's stock of optimists (which include The Guardian and Reuters) is the Wall Street Journal - a paper with a recent history of optimism. It is telling us that a debt restructuring and second bailout for Greece "appeared likely to go ahead according to plan".

German officials, this paper advises, have scrapped an idea to pressure Greece by withholding part of the bailout and the European Central Bank developed a plan to protect its holdings of Greek bonds from the restructuring.

The source for news of this turnaround, it appears, is German deputy finance minister Thomas Steffen, but the intelligence is not direct from the horse's mouth. He is said to have told German "lawmakers" that splitting the bailout is off the table, by "a lawmaker who was present" – upon whom the paper relies.

Thus we learn that he said (Steffen or the "lawmaker"?) he was "cautiously optimistic" that finance ministers at a meeting on Monday would approve the second aid package.

So, all is well in the world, at least until 23 March when the sky is going to fall in, according to lots and lots of unnamed sources. This, presumably, is to coincide with the total eclipse, as German troops march across the Polish border, supported by US Armoured divisions.

We will try to make sense of this and much more, as the day unwinds.