The killer of nations 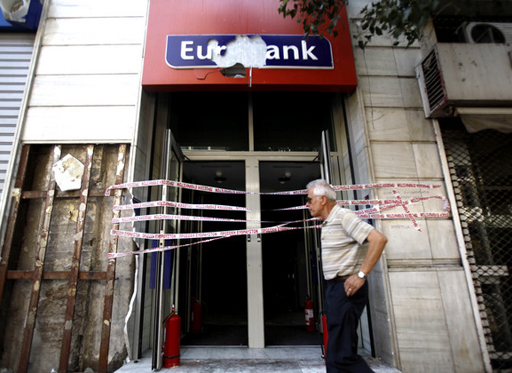 "Greece is like an Arab oil state without oil", writes Patrick Cockburn in The Independent. "It has an overgrown and expensive state machine hard wired with webs of patronage and corruption". This is worth noting as anyone familiar with the writings of Patrick Cockburn, particularly on Iraq, will know that he far from being the worst analyst on the block, and he most definitely has a point here.

The division between Europe and Asia – and the Middle East – is often put in Turkey. Politically and socially though, Greece perhaps has more in common with the Middle East than Europe. In the Middle East, Cockburn says, the state machine is "a crude, unfair but partially effective way of distributing oil wealth and binding recipients to the state through jobs and favours". He continues:


In Greece borrowing took the place of oil. Membership of the eurozone gave the country the same triple AAA credit rating as Germany, enabling it to borrow what it wanted at cheap rates. Euro membership, like oil wealth elsewhere, was a disincentive to political, economic and social change because the money was there to pay off friends and foes … Everybody was happy until the money ran out.

So far, so good. The rest of the piece, as befits the title, "Greece has an overgrown and expensive state machine", deals with the inadequacies of the state, glossing over the patronage and corruption.

But both are a central feature of the state machine and business, to the extent that corruption is most probably one of the main drivers in the economy. And unlike Italy, where the Mafia and other crime syndicates have something of a separate existence, organised crime in Greece is very much part of the state and the major business enterprises.

What is particularly damning about Greece's entry into the EU is that it has opened up the markets and administrative systems of the European nations to a vast nexus of corruption, linking the diverse criminal enterprises, with the tentacles extending into the heart of Brussels.

The tragedy is that, when criminality prevails, the normal rules of economics and governance no longer apply. Competition is distorted, value-for-money becomes a redundant concept and justice takes the back seat to the rule of the mob.

To that extent, corruption particularly is the elephant in the room – another one. No one in polite company wants to say that Greek politicians are a bunch of corrupt thugs – or in the pay of organised crime, itself indivorcible from the business community.

But as long as we continue to pretend that Greece is a normal state obeying the same rules as everybody else, where the rule of law applies, we will continue to be taken to the cleaners. Corruption is the killer of nations. Until or unless it is rooted out of the heart of the Greek establishment, there will be no real progress.

As it stands, money pumped directly into that benighted country simply presents more opportunity for theft on an industrial scale. And, when demonstrators target some of the commercial enterprises (above), they know what they are doing. The real looters (as in Britain) are on the inside.