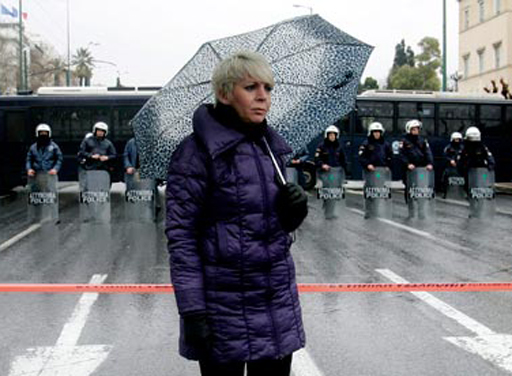 The Financial Times is now reporting on a scrap between the IMF, the US administration and – once again – Germany. There also seems to be a divergence of opinion between Germany and the Netherlands.

The German government, we are told, is set to resist increasing the size of the €500 billion European Stability Mechanism, the so-called "firewall", held as a back-up fund to shore up ailing economies in the case of a crisis, so preventing the dreaded "contagion".

Elsewhere, we see ZeroHedge reporting on "negative salaries" for some Greeks, making them worse off than "the run-of-the-mill slave". This is, we also learn, on top of another phenomenon - "negative gold".

Such detail and much more is complicating the reporting of the current crisis. Relying on market signals, though, will only take us so far. The market has its own agenda and a very narrow perspective. As Kenneth S Rogoff, a professor of economics at Harvard, says: "I am amazed by the short-term psychology in the market".

Getting bogged down in detail, and the baffling torrent of jargon, simply obscures les grandes lignes. It is this bigger picture that we must keep in focus, the one that is telling us, with increasing clarity, that Merkel is protecting her domestic position , fearful of a backlash "within her own centre-right coalition, and from public opinion".

The Guardian is telling us that several MPs from Merkel's conservatives and her junior partner, the Free Democrats (FDP) are planned to oppose the bailout package, when it comes in front of the Bundestag next week. On present calculations, she is unlikely to win a vote on the deal without the humiliation of relying on her socialist and green opponents .

This, of course, is not a sign of strength, but one of weakness, turning the conventional narrative on its head. As we have seen on earlier occasions, Germany is not calling the shots, the leader of a homogenous grouping comprising the so-called "troika" and the member states.

Rather, we are seeing evidence of what could only be inferred – that there are serious stresses within the different groups of players, and between the groups themselves. Merkel is having to respond to differing and conflicting international players, while squaring them with the demands from her own electorate. And, as the circle gets wider, calling in parliamentarians and cabinets from all the eurozone member states, the discord is going to get greater.

One of the most recent of the stresses to break out into the wider public sphere is the tussle with the IMF which, under pressure from Washington – the fund's biggest provider – is trying to reduce its exposure, dumping as much risk as possible in the laps of the Europeans.

Without needing to go into the details, that itself betrays another strand of nervousness, reinforcing the almost universal view that the Greek deal is going to go belly-up – not if, but when.

Yet to get its fair share of publicity is the bond deal with private bondholders taking the so-called "haircut" of 70 percent, reducing the Greek debt by €100 billion. The shenanigans over this deal, we are told, are going to poison the bond market, with untold consequences.

Such detail on economic issues, however, must not obscure the bigger picture – that Greece is going to default. This, incidentally, is now the view of Fitch Ratings, which is saying that it is "highly likely in the near term".

When that happens, it will initially be an economic event, but it will also become a major political event, which will then dominate proceedings (as do they do now, although less obviously), with huge ramifications.

Here, one wishes that our own politicians (and media) were more on the ball. The economic "contagion" is going to be matched by some pretty heavy political fallout – in Greece initially, but then spreading to Germany and rippling out from there.

Economics apart, the resultant fallout is going to redefine European politics, in a way that we can only guess at. At the end of a decade or so, we are going to see a Germany more and more detached from the EU. At the moment, against the combined might of the "colleagues", Merkel drew back from Armageddon, but that is not always going to be the case. German obedience can no longer be taken for granted.

Thus, while the economic events may for the time being dominate, puzzle and frustrate, we must never lose sight of those political grandes lignes. They, not the bean counters, decide the fates of nations.