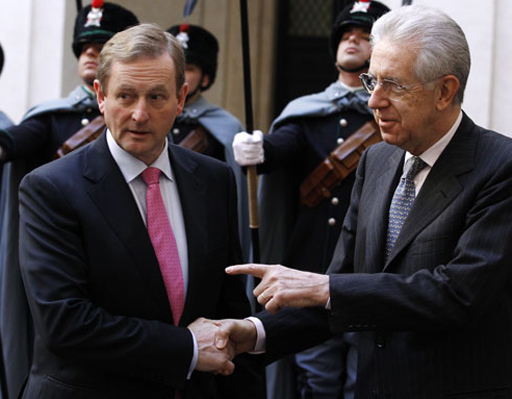 Whether it is good news or bad remains to be seen, but it certainly is interesting to see Taoiseach Enda Kenny (pictured above, left, with Mario Monti in Rome last week) telling the Dáil that his government intends to put the "fiscal compact" treaty to a referendum.

From the Irish Times, we learn that Kenny told the House that the Attorney General's advice was that "on balance", a referendum was required to ratify the treaty.

Kenny says he intends to sign the treaty at the end of the week in Brussels and then, in the coming weeks, his government will finalise the arrangements and the process leading to the referendum. No date has been was given for the poll.

Inevitably, the occasion of the announcement was used to make a propaganda pitch, with Kenny saying to his MP colleagues: "I am very confident that when the importance and merit are communicated to the Irish people that they will endorse it emphatically by voting yes to continuing economic stability and recovery". Unsurprisingly, he also says that he believes "… it is in Ireland's national interest that this treaty be approved".

Even then, a "no" vote won't actually scupper the treaty. The very nature of an intergovernmental treaty is that it does not require unanimity. In this case, it can go into force after it has been ratified by twelve states.

However, the Failygraph offers the headline: "Irish EU treaty vote threatens chaos". In the circumstances, that is probably an exaggeration – even assuming a negative vote – although the effects on the Irish economy could be severe.

Last December, finance minister Michael Noonan said a vote on the treaty would effectively be a vote on Ireland's membership of the euro. If that is how it is framed, then the "no" lobby could be under considerable pressure to perform.

On the other hand, Reuters says a "no" vote would prevent Dublin from using the European Stability Mechanism and, with about €20 billion borrowing costs to cover in 2014, "most analysts believe it will need more official funding to meet some of its commitments".

As it stands, a recent poll had 40 percent supporting the treaty, 36 percent against and 24 percent undecided. With the last referendum on the Lisbon treaty delivering 67 to 33 percent for "Europe", expectations of a "no" vote cannot be high – especially as the Irish government is very adept at invoking the "fear factor". 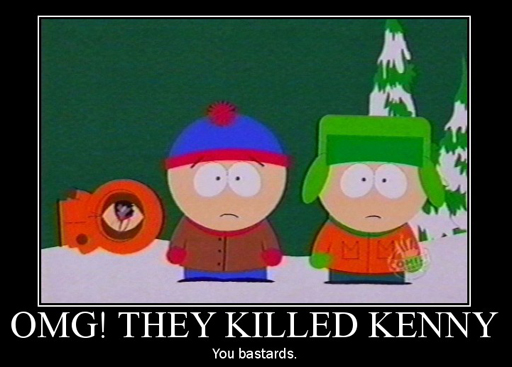 If voters believe a "no" vote might make credit harder to get, then there will be even less incentive to rock the boat, and with Ireland's main opposition party Fianna Fail saying it will join the governing Fine Gael and Labour parties in campaigning for a "yes", the vote almost looks a done deal.

Still, it us unwise to underestimate the Irish. Unlikely though it might be, we could still see some shocks, and this time the government says it will not be looking for a second ballot if the vote goes the "wrong" way. But if that happened, it would almost certainly be the End-a Kenny.