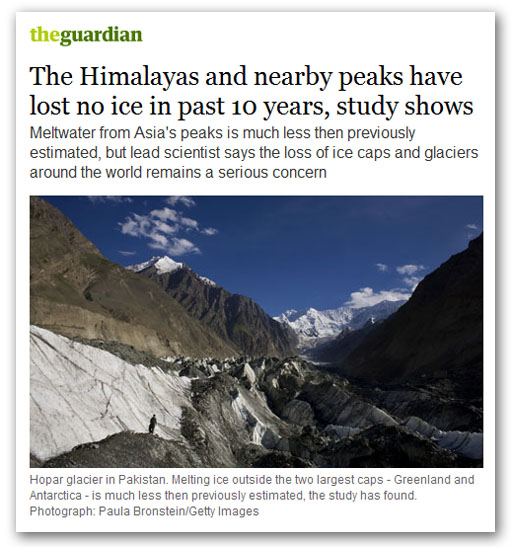 They can spin it every which way, but even The Guardian does not dare hide the finding that the world's greatest snow-capped peaks, which run in a chain from the Himalayas to Tian Shan on the border of China and Kyrgyzstan, have lost no ice over the last decade.

The work comes from a survey of all the world's icecaps and glaciers, made possible by the use of satellite data. Overall. And from this, it has been found that the contribution of melting ice outside the two largest caps – Greenland and Antarctica – is much less than previously estimated. Furthermore, the lack of ice loss in the Himalayas and the other high peaks of Asia are responsible for most of the discrepancy.

Yet the claim that the Himalayan glaciers were about to disappear was at the heart of Glaciergate, and the "Voodoo Science" jibe by Rajendra Pachauri. But, as we know on this blog, we haven't needed a satellite survey to tell us that the glaciers were perfectly safe.

We know this already from the British government-funded "Sagarmatha survey", headed by two British scientists, Gwyn Rees and David Collins. Rees was to tell an interviewer that, "having heard alarming predictions of Himalayan glaciers disappearing within the next 40 years, he teamed up with eminent glaciologists "to develop new forecasting techniques which will give us a better understanding of how glaciers are likely to respond as the climate changes".

One of those "eminent glaciologists" was, of course, Dr Syed Hasnain – the man responsible for the original Glaciergate scam, and in June 2004 Rees and Collins reported that the threat, that all of the region's glaciers may soon disappear, "would seem unfounded". The catastrophic water shortages forecast by some experts were "unlikely to happen for many decades, if at all".

Nevertheless, we can now also rely on Bristol University glaciologist prof Jonathan Bamber. He says, "The very unexpected result was the negligible mass loss from high mountain Asia, which is not significantly different from zero", adding that these data are " … the most reliable estimate of global glacier mass balance that has been produced to date".

Bamber notes that 1.4 billion people depend on the rivers that flow from the Himalayas and Tibetan plateau, which was the reason why the scare had to be floated in the first place. Glaciers are to central and south-east Asia what polar bears are to Europeans, in totemic terms.

A bit of damage limitation follows, with Bamber telling us that the new data do not "mean that concerns about climate change are overblown in any way". Instead, he would have it that there is a much larger "uncertainty" in high mountain Asia than was thought. You bet!

Thus, all the warmists have now is Greenland and the little bit of Antarctica that is actually melting. With that, the scariest estimate they can come up with is that, through 2003 to 2010, melting ice raised sea levels worldwide by an average of 1.48 millimeters (0.06 inches) a year.

That way, it is going to a hundred years before we get to six inches, just supposing we are not in the grip of a little ice age by then. Whatever else though, Pachauri pulled off his little scam just in time. Now the money is in the bank, he can walk away from it and try our something else to supplement his income.

But when the histories come to be written, glaciergate will get a special place, as an illustration of how easy it is to convince the gullible that the sky is falling in.