A byword for shoddy journalism 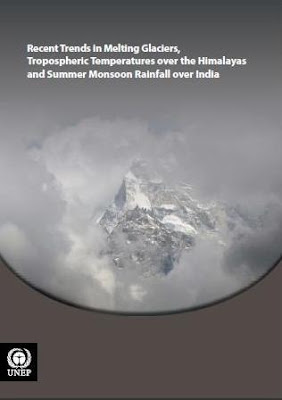 Tom Chivers, we are told, is the Telegraph's assistant comment editor. He writes on science, culture and anything that crosses his mind - the latter assuming, of course, that he has one or is capable of using it.

Evidence of this is not abundant in this piece, purporting to be an analysis on the recent report on glaciers. He is, however, taken to task by Bishop Hill.

What most people seems to miss, however, is that the insertion of the 2035 claim was not a mistake - which means it must have been quite deliberate. For this, we have as an authority nothing less than the UNEP report of 2009 (pictured), and Prof. Murari Lal, one of the authors of the IPCC report.

Lal says, quite unequivocally, that the IPCC statement that the Himalayan glaciers are likely to melt by 2035 had been made on the basis of a report of the World Wide Fund for the Nature (WWF) 2005 that had quoted Prof Syed Hasnain. He noted that "it was wrong to assume, as has been done in sections of media that the year 2035 had crept in the report by mistake" - see below right. 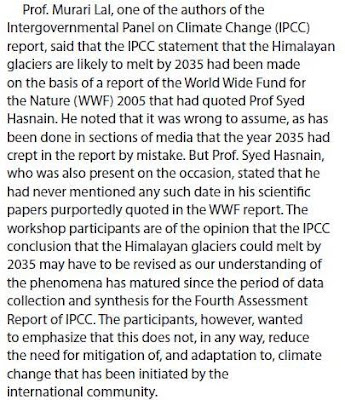 This, we explored in detail in several posts, especially this one and this, plus an article in The Sunday Times, which is now behind the paywall, although we see some discussion here. Then, there is the unequivocal evidence, outlined here, that Sayed Hasnain was quite deliberately and knowingly misrepresenting the glacier "threat".

Of course, we don't expect Chivers to be looking at the competition, and he would not stoop to read the likes of EUReferendum for fear he might actually learn something. But it would not be unreasonable to expect him to read papers from his own group, as in The Sunday Telegraph, where Booker has written some detail.

Strangely, though, Chivers finds a BBC source, quite adequate, which tells you a great deal about the man – and why the Failygraph has become a byword for shoddy journalism.