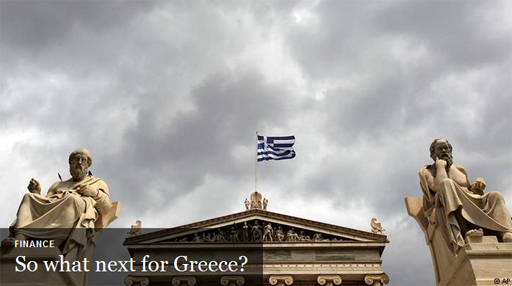 What have we missed? That was the question we were putting yesterday – although it seems long ago in the distant past, so fast are events moving.

The answer now comes, embedded in a leader in Deutsche Welle, which reiterates the obvious – that Greece is bankrupt and that the bailout is going to fail. But, crucially, it then says: "This may happen by the fall, by which time Spain and Italy have hopefully restabilized".

This is a highly credible scenario. While the focus is on Greece, the real action is on the Spanish and Italian fronts (and, presumably, Portugal). The aim is to stabilise their economies and erect the famous "firewalls" to prevent "contagion". Once the protective measures are in place, the Greek economy will be allowed to crash and burn – but only then.  At the moment, it is too early.

Up front, the pretence is there – that these measures are being put in place to save the Greeks. But the fact is that the bailout has nothing to do with the Greeks, per se, and everything to do with protecting the eurozone, and the banking system. Put it any way you wish – Greece is the sacrificial lamb. When its time comes, it will be slaughtered.

Significantly, this is being dealt with by DW as an economic issue, and a separate report has Hans-Werner Sinn, head of the Ifo-Institute for Economic Research, telling us that: "The plan to radically revive the Greek economy with the euro is an illusion". By way of balance, we are also told that the "troika" denies that it is buying time.

Therein lies the real illusion – the picture of the gallant "colleagues" battling away to save Greece, their struggles becoming an all-absorbing soap opera. In the real world, Greece is being positioned for a fall. The only thing not decided is the exact timing, although the autumn is pencilled in, when everybody is refreshed after the summer break. Here, the Americans describing autumn as "the fall" is rather appropriate.

Nevertheless, the plans for Greece are not as brutal as they may appear. The general view is that its economy cannot prosper without growth and, to achieve that, it must be restructured. That, it is felt, will not happen until the plug is pulled. Then, with Greece out of the euozone, the talk is of a Marshall Plan type of package that will put the country back on its feet.

So far, so good, but the economic calculus ignores the human side and the prospect of a long hot summer of riots in Athens and elsewhere. And what may be planned as a managed retrenchment by "colleagues" may be seen from the outside as a headlong, disorderly retreat.

In politics, impressions are everything. Politics themselves are an illusion – the art of managing expectations, and it is here that most damage may be done. If the Greek collapse is seen as a disaster, the knock-on effect throughout Europe may be severe, especially in terms of the European Union's credibility.

So far, the commission seems to have played a reasonably successful hand in diverting attention from itself. With Merkel in the frame, we hear little of Olli Rehn, and not a lot about van Rompuy, even though these two are also major players. And the current wave of Germanophobia, as Helen noted, also serves to keep attention off the malign role of the commission.

What we can then expect in the autumn, as Greece is finally allowed to sink under the waves, is the announcement of a grand rescue package – an EU rescue package, demonstrating the solidarity of the "colleagues" and the strength of the project.

In the meantime, the game is to keep us focused on the soap opera, and the endless guessing game. This will allow the arch manipulators to bide their time and spin the publicity to a gullible media and largely indifferent public, bored and baffled in equal measure by the ongoing drama.

After the fall, we will be presented with the images of "Europe" coming to the rescue. And as long as that image sticks, the illusion of power will be maintained. Then – the "colleagues" hope – the revolution will be deferred yet again.