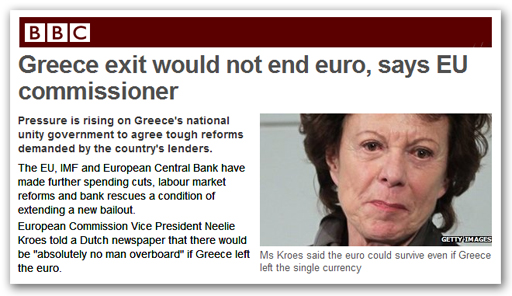 It is getting to the point that when items about Greece (and there are many) come up, one tends to groan inwardly and hurriedly move on. Such was the reaction this morning when I saw this (above). On reflection though, one can see in it a veiled threat, the denial revealing the intent, with the "colleagues" preparing to throw Greece overboard.

Maybe though, if it was a threat, it might be working. The WSJ certainly thinks so, suggesting that prime minister Lucas Papdemos has gone back to the drawing board "amid efforts to agree to a new debt deal and avoid Greece defaulting on its debts next month".

"But", says the piece's author, Steven Russolillo, "the situation in Greece is messy", adding, "That's putting it politely". And when he offers the latest from Athens, which has government officials putting together a detailed final document, he tells us: "We'll believe it when we see it".

With Greece in "scramble mode", negotiating with the troika — European Commission, IMF and ECB — for a new loan programme, it would appear that something must happen by 20 March when a large bond payment is due. Then, €14.4 billion in readies will be needed.

"Don't hold your breath", cautions Russolillo. Famed investor Dennis Gartman, who publishes an eponymous investment newsletter, sifts through the chatter and is confused, to say the least. "We've lost count of which deadline is which; which 'drop dead' date is truly a 'drop dead date' and which are simply dates of confusion", he says in his newsletter.

And that is the only thing that is really comforting to come out of this situation – to find that the "experts" are as confused as we are. This is not Greek but Irish politics, home of the famous aphorism, "if you think you understand, you haven't been listening".

Perhaps then the word from the commission really wasn't a threat. Maybe they have actually lost patience and are really planning to ditch Greece. We might know more after a meeting of Greek leaders tonight, against a background of yet another general strike.

As the man said, though, don't hold your breath.