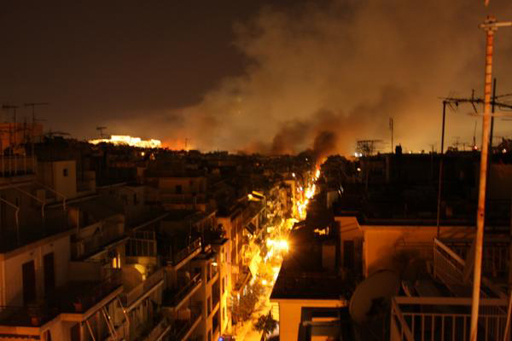 Final tally: Out of 300 MPs, 199 voted in favour and 74 against the second bailout memorandum. Outside looks quiet ... for the moment. We'll pick up the story again, in the morning.

UPDATE 23:19 GMT: Parliament has voted in favor of new austerity bill. All of KKE, Syriza and Democratic Left MPs voted No, as well as 21 New Democracy MPs (one in four- ND has 83 MPs in total) and 13 Pasok MPs. Laos MPs voted No, leader absent, the two former ministers voted Yes. All but one Democratic Alliance MPs voted Yes. Figures to follow. 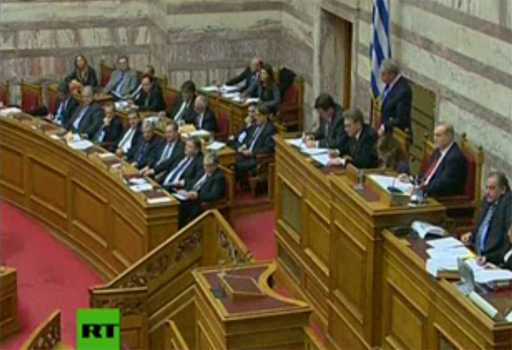 UPDATE 22:35 GMT: Voting has been going on for about 15 minutes. At a rough guess, the yes have it, but it still goes on. Outside, more than ten buildings reported fired, and many shops looted. The buildings fired included the neo-classical home to the Attikon cinema dating from 1870 and a building housing the Asty, an underground cinema used by the Gestapo during World War Two as a torture chamber. 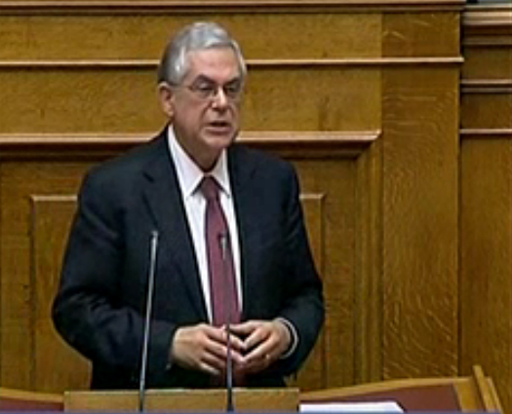 UPDATE 22:11 GMT: Prime minister Lucas Papademos is speaking. Says that Greece had to continue being a member of the hard core of Europe. It's not the time for detailed analysis, it's the time for decisions. The health ministry says 54 people have been taken to hospital. (Live news blog from Athens News - via ZeroHedge.)

UPDATE 20:13 GMT: Seven buildings are reported to have been fired. A mobile phone dealership and a glassware store a reported amongst them, plus a cinema. Earlier, as many as 100,000 protesters were said to have been demonstrating outside the parliament. 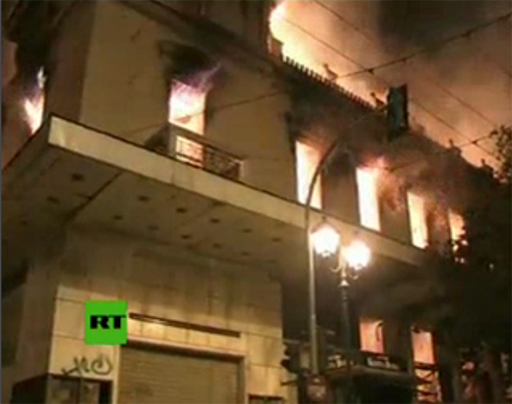 UPDATE: A Starbucks store and a branch of Greek bank Eurobank (above) have been set on fire in Athens. The incident occurred in Korai square, near Syntagma square. Clashes continue between the police and hooded black bloc anarchists who mingled with tens of thousands of peaceful demonstrators outside the Greek Parliament where, at 11pm, MPs are scheduled to vote.

Skai TV reports that police have run out of tear gas and have asked for more supplies to be brought. No doubt, they have a hotline to the nearest rep. Zerohedge is covering the action.  The live action seems to confirm this ... not a lot of tear gas visible. 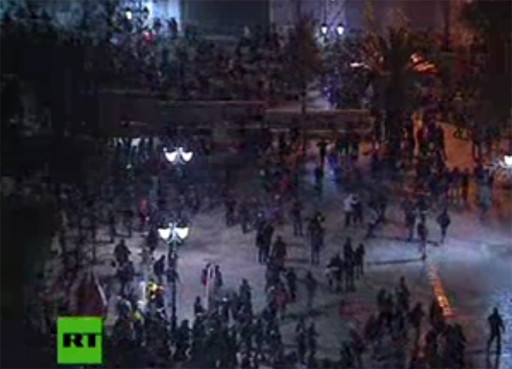 Demonstrators had pledged to turn out in force at 6 p.m. (1600 GMT) on the main square in front of the parliament, although rainy weather may limit the numbers of protesters. Even if numbers are sparse, though, this still seems the most valuable investment opportunity. Booker, in the meantime, has a few observations on the issue.

And despite the unpopularity of the austerity measures, the general view – if The Guardian is any guide – is that Papademos is going to get a majority in parliament. The tribalism of the political classes will win out.