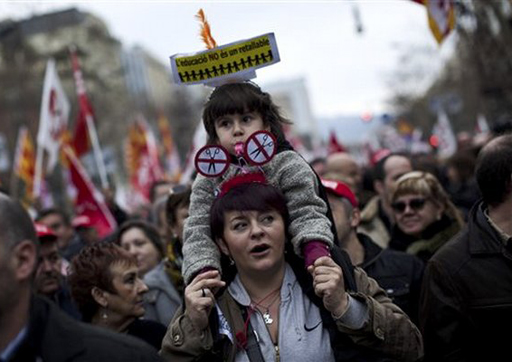 Ambrose tells us that the Spanish are revolting (as well as the Greeks), with their new prime minister, Mariano Rajoy, refusing to go down the path of austerity and halve the eight percent budget deficit this year. We are also told that there is near unanimity across the political spectrum that drastic pro-cyclical tightening at this stage is unwarranted and dangerous.

An example is quoted of Josep Borrell, ex-president of the EU parliament. He is said to be the voice of Spain's pro-European establishment, and says such debt-deflation risks pushing the banking system over the edge. "To cut the deficit almost four points in one year would be a true depressionary shock for an anaemic economy, made worse by the requirement for banks to mark their real estate losses to market prices", he avers.

As we wipe away the tears, though, one also wonders whether this is the Spain with its rapacious commercial fishing fleet, equipped with generous EU grants, known for its plundering of British and African waters?

Is this also the Spain that is so poor that it has been one of the net beneficiaries of the EU budget, hoovering up around €60 billion in EU net payments in the eleven years from 2000-2010, yet which has had enough spare cash to buy up our banks and Heathrow airport?

And now that poor little Spain is feeling badly treated, it seems we are supposed to buy into the narrative that Germany is again "the overbearing enemy". Thus does apologist Borell "warn" that "an atmosphere of hostility is building up in a Continent divided between a rich and flourishing North and a South in danger of being reduced to a protectorate". Says the man, "If we carry on like this we are going to destroy the European project".

No doubt the "iron inflexibility" – attributed to Germany and which Ambrose so deplores - is having a malign effect. But one cannot avoid pondering about the total lack of complaint from the Spanish when the good times rolled.

Germany, however, in its new-found role as the scapegoat of Europe, is putting the bailout deal to the Bunderstag today, with interior minister Hans-Peter Friedrich suggesting that Greece should be "made an offer it can’t refuse" to leave the eurozone.

This coincides with almost two-thirds of Germans opposed to further assistance to Athens, according to a new poll by Emnid, a German polling firm, released on Sunday. This leads Friedrich to assert that the EU should "create incentives for an exit" by Greece.

Yet, even though an early exit is the best possible outcome for Greece, there are those who still insist on painting German as the bad man, even though – as ZeroHedge points out, the problem is the weight of sovereign debt. The cold hard fact Greece is facing is that it's now at the point where extraordinary losses need to be taken – and no one wants to take them.

Given current conditions, though, German finance minister Wolfgang Schäuble has written to MPs warning that "this may not be the last time" they would be asked to extend Athens a financial lifeline. A third bailout may be needed to shore up the second.

Against this background, Mark Grant, managing director at Southwest Securities, comes late to the party, wondering if Europe really wants to bail Greece out or if Germany is not forcing so many conditions that they are trying to have them exit the euro on their own so the Germans are not seen as the Lord High Executioner.

By the same token, one wonders whether Schäuble is not trying to have his MPs vote down the second bailout, without being seen as responsible for the outcome of the second vote. And if that is the case, he is pushing at an open door. "At some point, you reach the end of the line because further liquidity isn't solving the problems," Rainer Brüderle, parliamentary chief for the government's junior coalition partner, the Free Democrats, says.

And with everyone conscious that, once (or if) the Greek issue is settled, waiting in the wings is poor little Spain, and the Germans are going to have to go through this all over again, you can see why they will want to cut their losses.

If the Germans are to be cast in the role of donning their jackboots and goose-stepping over the oppressed peoples of Europe, it might as well get its money's worth. Others, though, might be less than convinced by the "poor little Spain" meme, recalling that Franco was perhaps the only European leader to best Hitler in diplomatic negotiations.

After failing in late October 1940 to convince the Spanish dictator that he should join the war, the Führer famously confided with Mussolini that he would "rather have three or four teeth pulled" than go through another meeting with Franco. In dealing with the Spanish, nothing much may have changed. They are tough nuts.

However, nothing is going to change the fundamentals. At its root, Ambrose reminds me, the EMU crisis is a trade crisis - something Mervyn King is keen to tell us. The North has a chronic surplus and the South has a chronic deficit. You cannot close this gap simply by forcing the South to retrench.

Ambrose consistently argues that you will end up with a protracted depression, and that is exactly what they are getting. The problem is the euro itself. Germany is trying to deflect the blame onto the PIIGS rather than admit the Project is deformed. And that is why he is critical of Germany right now.

Those who defend the German narrative of this crisis, he says, are inadvertently defending the Project. I am not so sure. I remain of the view that, in the end, it will be Germany cutting loose that will bring it down.