You can't fool all of the people 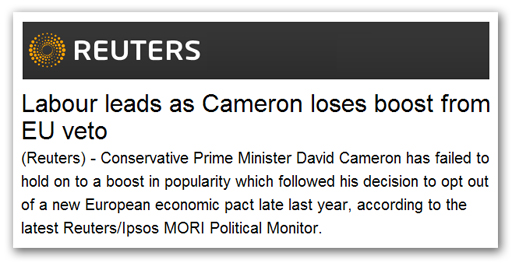 In retrospect, we can now say it was never going to last, and indeed it has not. While initially The Boy was riding high on the back of his pretend veto, Reuters is telling us that the halo has slipped.

From a heady peak of a forty percent lead in December (against 34 percent for Labour), the Tories have slipped back to 35 percent, with Labour in the lead at 41 percent, with the Lib-Dims on 12 percent. Effectively, the positions have been reversed.

Compared with January, there is a three point drop, and only forty percent are now satisfied with Cameron's performance. This puts his "net satisfaction rating" at minus 11, down ten points from January, and contrasting with his 48 percent in December, then giving him a net score of plus five.

Unsurprisingly though, give the calibre of the opposition, The Boy remains the most popular of the main three party leaders.

However, what emerges clearly from the result is confirmation of the old saw: you can't fool all of the people all of the time. Capturing briefly the anti-EU sentiment of the country, very much under false pretences, Cameron and his party gained hugely in approval ratings with his pretend veto.

Now that the gilt has worn off, and The Boy has been revealed for what he really is – just another sad little europhile - both he and his party have lost ground. Nevertheless, we are still on the two-party see-saw, which means that some people still see merit in an alternative.

That would seem to confirm the other part of the saying, that you can fool some of the people all of the time.