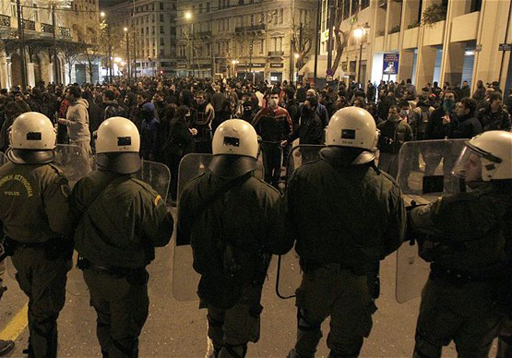 No one is pretending it [the bailout] will end Greece's problems says Reuters, which then makes it plain that the bulk of the bailout money will not go to Greece.

A debt sustainability report delivered to eurozone finance ministers last week showed that under the main scenario, Greek debt will only fall to 129 percent by 2020. And that, of course, is assuming that the Greek government can deliver the promised cuts, and maintain its tax income – neither of which conditions look capable of being fulfilled.

And just to rub it in, it seems as if the escrow account idea has wings, although it has not been decided who will manage the account. On the face of it though, the effect of this is that Greece takes on the €130 billion loan, but has no power over how the funds are dispersed.

All this comes with Papademos flying to Brussels, doubtless to get his instructions from his masters, with The Sun reporting that another condition of the deal will be a postponement of the general election.

The concern to stop the elections is understandable, with current polls showing support for the two main parties nose diving. From 42.5 percent in October 2010, the socialist PASOK is down to 8.2 percent, according to MRB and published in the newspaper Real News, with the conservative New Democracy party dropping from 28 to 19 percent.

This is being recorded as a "historic low" for the two main parties, matched by a lurch to the left, with a coalition of the Communists, the Radical Left and the Democratic Left taking a combined 43.5 percent of the vote in one poll.

Variously reported, anything up to 59 percent of the population want an immediate election after the bailout has been decided but, whether a rejection of that demand will translate into violence is anyone's guess. The media, talking up the prospects of a violent response, talk of 2,000 demonstrators clashing with police, but these are small numbers compared with the half-million that the unions can put on the streets.

We haven't seen much police hardware in the pictures so far, and the "thin green lines" of police are just that … thin. So far – apart from the rash of burning Sunday week last - the police seem to be keeping control, even without pulling the heavy gear.

Thus, talk of an uprising may be premature, and even without substance. Away from the centre, the situation is reported calm. One wonders whether the more severe reactions will come not from the Greeks, but from the German people, when they realise what their rulers have committed them to.

COMMENT: "EAT AND DESTROY" THREAD
Posted by Richard at 13:06