Other agendas at work 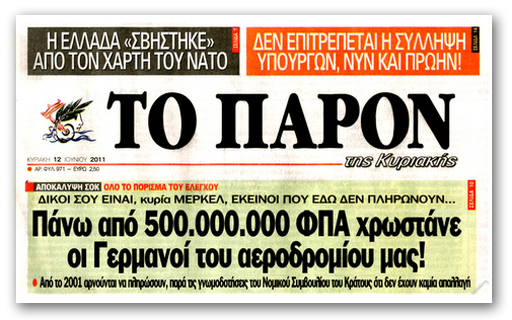 Ambrose makes the point about the brutality of the terms imposed on Greece, as a condition for financial assistance, noting that when Germany needed assistance in 1953, the settlement was altogether much more gentle. Thus does he see the current action, inspired by Germany, as a "blunder" which perhaps former chancellor Konrad Adenauer would not have made.

However, looking it the situation another way, this really does reinforce the argument put up by Mary Ellen Synon, discussed in our previous piece, that Germany is deliberately trying to force Greece out of the euro. But a stronger part of the Synon thesis is the grounds on which the Greek deal was refused, last week, the Greek government being told to go away and find another €325 million in cuts.

You have to ask yourself, says Synon, if €325m is so significant a sum that these euro-bosses would risk Greece going into uncontrolled default next month and crashing out of the euro – Greece has €14.5bn in debt repayments due on 20 March - rather than just wave the latest bailout loan through? No, it's not, she adds rhetorically.

In terms of any Western country’s finances, €325m is petty cash, she says. There are private individuals walking around the streets of most capital cities in the world who could write a personal cheque for €325m. The €325m is not a reason. It's an excuse.

That sum now comes into high profile as a number of commentators recall a piece in the Greek Sunday newspaper To Paron published in June last year. It was headlined "SCANDAL IN THE HOUSE: €500 million not collected from the Germans" (pictured above). 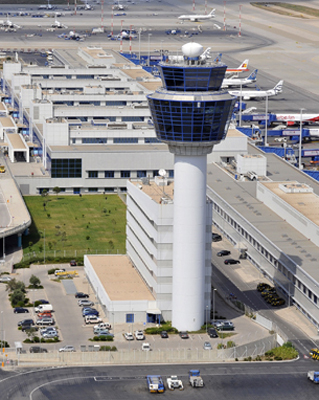 This is our old friend Hochtief. Back in 2005 we were slating the then German-owned company for its dubious dealings over the construction and management of Athens International Airport (pictured right). Not least, there was the question of why there was no record of any VAT payments being made on the construction cost, which should have amounted to €270 million.

In fact, that money, going back to 2001, was unpaid. And in June it publicly emerged – as a result of questions from the 13-strong New Democracy – that the total of unpaid VAT has now grown to €500 million.

The liability for VAT was confirmed in 2009, on the basis of an opinion by the State Legal Council and, on 30 April 2010, the General Directorate of Taxation reiterated that there was " … no reason for issuing a new opinion", reaffirming that there was no exemption from paying VAT.

Having never paid VAT, Hochtief again tried to postpone the payment of VAT but the Administrative Court of Appeal ruled against them. The company finally paid after ten years a quarter of the VAT due for the years 2001, 2002 and 2003.

For that period, the total VAT due was assessed at around €150 million euros, on which basis, the debt is currently estimated at €500 million. This does not seem to include the €270 million for the VAT on construction costs and, on top of that, there will be fines for late payment.

MPs from the New Democracy party were, back in June, demanding that the criminal law be invoked, and measures taken to recover the €500-plus million. But, so far – even to this date – there has been no response from the Greek government.

However, the strong focus in the To Paron article was that the Germans owed this money, with the inference in some blogs that the issue could be thus resolved by Mrs Merkel. And that applies to an even greater extent to this week when, instead of dunning the Greek government for an extra €325 million, she could have gone knocking on the door of Hochtief.

And so we would like to leave the story but, as always, it is a little more complicated. As we now know, the airport was built and is run not by Hochtief but by AIA S.A. (Athens International Airport). Hochtief AG is only a 45 percent shareholder of AIA, in a consortium with ABB Calor Emag Schaltanlagen AG and Flughafen Athen-Spata Projektgesellschaft (FASP). The Greek state owns the other 55 percent.

Thus, it might appear that the Greek state owes itself at least €275 million from VAT collected from Athens airport revenues.

However, the irony does not stop there. Although To Paron made a big deal on 12 June of Hochtief being German-owned, on 18 June, Deutsche Welle reported that the Spanish construction group ACS had secured the majority stake in Hochtief, completing a nine-month-long takeover bid. It then held 50.16 percent of voting rights in the company.

Hochtief, incidentally, had posted losses of €169.5 million in the first quarter of 2011 and later, when it tried to sell of all its airport interests, these were valued at a mere €1.6 billion, only slightly more than three times the debt said to be owed by To Paron.

The point relevant to this post though is that, whatever the amount that is owed by Hochtief, it is a Spanish company now, with Spain itself being one of the PIIGS, alongside Greece. Merkel is not in the frame, not that she ever was.

Nevertheless, the Synon point does stand. To threaten to pull the plug on Greece for a "mere" €325 million – less than a single VAT debt from its international airport – is bizarre. And that says there is a lot more going on than meets the eye. There are other agendas at work.