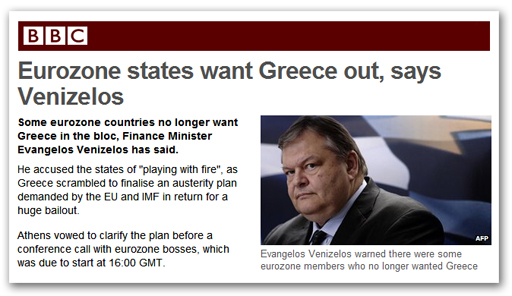 Long after it had become evident to a number of seasoned observers (although still not to others) that Germany was trying to force Greece out of the euro, the BBC reports on Greece's Finance Minister Evangelos Venizelos complaining that some eurozone countries no longer wanted Greece in the single currency.

The Guardian, is amongst those who have belatedly noticed what is going on. It has Venizelos him noting: "We are constantly being given new terms and conditions" - picking up on more detailed Bloomberg report.

This changes the dynamics of the game, as all the member states are supposed to be keen on Greece staying in the euro. As ZeroHedge observes, the decision to withdraw had to be made by Greek's own politicians, with no detectable fingerprints from the real assassins.

Essentially, in going public, Venizelos has trumped Merkel's hand, and then upped the stakes by declaring that all the demands set by the country's international lenders have now been met. In particular, leaders of both parties in the Papademos coalition, including conservative leader Antonis Samaras, have given written undertakings that the austerity measures will be implemented, election notwithstanding.

As to the eurozone ministers and their "conference call", few details have emerged from what turned out to be a marathon three-hour session. There is talk, though, of "specific mechanisms to strengthen the surveillance of programme implementation", which may have in them the makings of yet another hurdle.

Short of the Greeks buckling, however, it looks as if the Eurogroup will have run out of options and be forced on Monday to approve – in principal – the bailout deal. Merkel and her northern allies have until then to engineer still more excuses for the Greeks to drop out.

Somebody is going to have to play a pretty powerful wildcard, as the tenacity and sheer staying power of the Greek political classes, with the backing of the EU commission, seems to have been seriously underestimated.

That card may be the Greek people, who are already buckling under the strain and have long ago lost faith in their politicians. Whether they can pull the plug, though, remains to be seen in a game that gets more complex by the hour, with many more twists and turns to come.

Adding to that complexity is the expected news that Sarkozy is seeking re-election. Slated as a supporter of Greece's bid to stay in the euro, he will be playing an intensely political game, with an eye on his domestic audience.

There, French sentiment will start to matter. If Sarkozy starts to see electoral advantage in dumping Greece, he could end up back alongside Merkel. Then we will be seeing the "motor of integration" up against the commission – the EU equivalent of a rock meeting a hard place.

Once more, it thus seems, as the very final plays were beginning to emerge, rabbits are being pulled out of hats at breathtaking speed. And most of them may be speaking French.