"India is as bad as Russia" 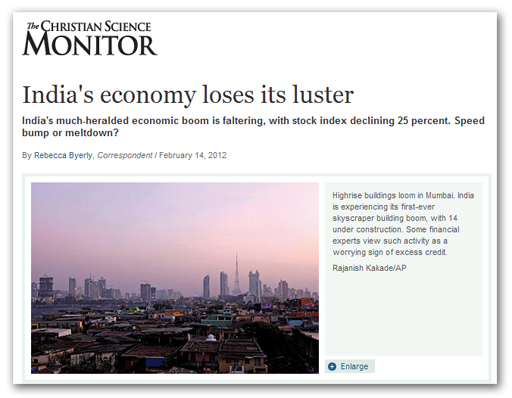 The Indian aid controversy seems to have disappeared from the British media for the time being, but the US media is taking a look at the country – albeit for different reasons. The Christian Science Monitor claims that India's much-heralded economic boom is faltering, with stock index declining 25 percent. It asks: "Speed bump or meltdown?"

It's not just that India's economic growth has skidded to a halt, says the CSM. A series of key government reforms have stalled while an anticorruption campaign has created uncertainty about what tainted money lies beneath balance sheets. Investors are fleeing.

The journal cites Nick Paulson-Ellis, India head for Espirito Santos Securities. He says: "Foreign investors are as nervous as we have ever seen them about India's global investment environment … Many United States investors have pulled out entirely".

This, though, is very far from sour grapes from an outside source. The Indian press (not famed for its objectivity) is equally voluble, with The Hindu offering an interesting analysis from S. Neelakantan, former director, Madras Institute of Development Studies.

He complains of a top-down approach – where major economic decisions are made and executed by the government. This has led to over-regulation, and fruits of economic development being "pocketed by people who could reach to the corridors of power".

The "visible hand" of the government, he says, failed to provide the necessary growth to alleviate poverty from society. Hence the government ushered in economic reforms where market forces started playing a major role. Thus does Neelakantan continue, observing that the country now finds itself in a piquant situation of inheriting only the vices of socialism and capitalism.

Going back to the CSM, it also calls in aid the chairman of Goldman Sachs Asset Management, Jim O'Neill, who brands India "the most disappointing performer" of the so-called "BRIC" countries (Brazil, Russia, India and China), complaining that it suffers from "a severe lack of leadership". "India is as bad as Russia on governance and corruption and, in terms of technology, Russia is in fact much higher than India", says O'Neill.

The difference, as far as we are concerned, it that we give aid to India and not to Russia (any more – when we did, it too disappeared in a miasma of corruption and theft). And apart from any other issues, the millstones of corruption and poor governance – which often go together – should warn donor countries to stay clear.

But what is even more clear is that India is quite capable of identifying and arguing through the nature of its own problems. The very last thing it needs is the dead hand of British bureaucracy dispensing aid, to add to its woes.