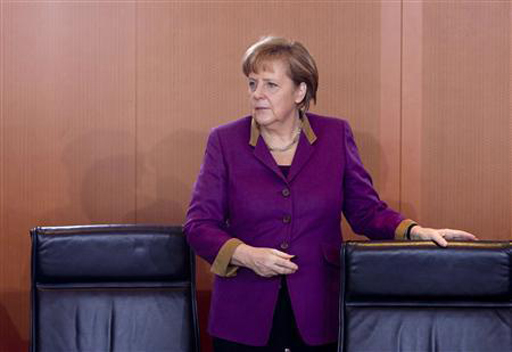 As you might expect, German officials are stressing that they want to keep Greece in the eurozone. Merkel's spokesman, Steffen Seibert, has vigorously denied "market rumours" that Germany was happy to let Greece go bankrupt and leave the eurozone. "I can clearly state for the federal government that these rumours are false", he says. "There has not been such a decision from Germany".

We also have Luc Frieden, Luxembourg's finance minister, who has expressed himself "relatively optimistic" that eurozone finance ministers will take a decision on Monday, but he too is warning that more steps are needed in the coming weeks.

"The Greek authorities must implement these measures, but since taxpayer money from other (eurozone) states is involved, it is in a partnership that we must ensure that they are implemented," Frieden says, at the same time denying that this amounted to placing Athens under "wardenship."

Thus do white men speak with forked tongues, as even now we are seeing even more logs stacked on the tracks, presumably in the hope of derailing the Greek rescue plan. The latest is the idea that €130bn soft-loan package should be placed in an escrow account, keeping the disbursement of funds out of the hands of Greek politicians.

This ties in with a suggestion from Schäuble that Greece might delay its forthcoming general election and install a technocratic government on similar lines to the model currently in place in Italy. Ambrose reads that differently, as unwarranted German interference in Greek affairs.

That leaves another option being kicked around -that the bailout should be put on hold until after the general election, with the Greek government given a bridging loan to allow it to pay off the €14.5 billion that comes due on 20 March. Then (presumably) the "colleagues" go for the full Monty, negotiating with the newly elected government.

Mary Ellen Synon, however, is having none of it. She tells us: "On some Friday at 5 pm the Athens government will announce that they are pulling their country out of the single currency and re-establishing the drachma". But, if that is also the preferred option of Angela Merkel, it is necessary to remember that her actions are not spurred on by any sense of malice, or desire for world domination.

Even a few days ago, Reuters was telling us that her "dogged insistence" on strict terms for aid is one of the reasons Merkel has kept a lid on growing scepticism in Germany about how deserving Athens is of such largesse. In one recent opinion poll, we are reminded, two thirds of Germans surveyed said they doubted Greece's determination to make savings.

For Erik Nielsen, global chief economist for Unicredit, an Italian bank, the chancellor's unmatched success in preventing the rise of a major eurosceptic backlash is down to her heeding the "German public's sensitivities to lending their tax money to a country that does not implement very many of its promises."

Such points had been made earlier by the Financial Times, at the end of January telling us that the German chancellor was facing growing political pressure at home to demand stricter fiscal discipline from her eurozone partners.

As are Greek politicians playing to their own domestic audiences, with Greek president Karolos Papoulias attacking German "insults", so too must the Germans play to theirs, and no more so Merkel who is facing an uphill battle to re-election.

Perversely, given that so many commentators believe that by far the best option for Greece is default and withdrawal from the euro, the demonisation of Germany, and Merkel in particular, seems misplaced. Right now, as the politicians play games, and the EU commission seeks to block Greece's exit,  Merkel is probably the best ally that the Greek people have.

Further, Merkel's tactics seem to be working in her home country. As Reuters tells us, the closely-watched "Politbarometer" poll for public television station ZDF showed last week that 77 percent of Germans believe she is doing a good job.

From her position in late 2011, when she looked terminally damaged, with her coalition partner, the Free Democratic Party (FDP), in meltdown, Merkel is once again the most popular politician in Germany, well ahead of her possible challenger in the next federal vote, Social Democrat (SPD) Peer Steinbrueck.

With these results, one can imagine that the German chancellor will hardly be well disposed to offering Greece any further (or any) concessions. Thus, the Tip O'Neill aphorism seems to be at play. On that basis, if you want to know what is going to happen in Greece, look at the polls – the German polls.

And, for the time being, Merkel's best option looks to be a delaying strategy, buying time for a decision that would be acceptable to her voters – and probably the most favourable for the Greek people, as opposed to their self-serving politicians. This is the one where the Greeks start printing drachmas again.