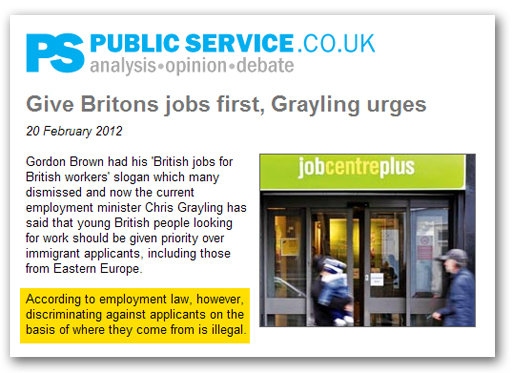 The Sun and the Failygraph are covering this story, and even this obscure journal (above) points out that to give priority to a group on the basis of where they come from breaches employment law.

However, The Sun goes further, admitting that "EU laws ban discrimination against foreigners who apply for work here". But the Failygraph, recording the comments of the employment minister on Sky News, told us that when it was put to him that prioritising British candidates could fall foul of those rules, Grayling stood by his remarks.

He said: "I just simply hope that the choices that employers make in this country will be to give young unemployed British people a chance, so it would be bizarre if I didn't say that and we'll do everything we can to encourage them to do so".

So that is what it has come down to … in matters of acute national interest, our minister has nothing to offer, other than to incite employers to break the law and then "just simply hope" that they get away with it.