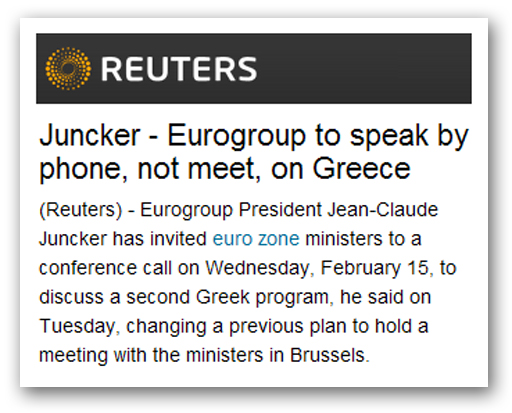 Reuters is amongst the many to break the news that the fabled Eurogroup meeting – the one that was supposed to agree the Greek bailout – is not going to happen. Instead, president Jean-Claude Juncker has "invited" the eurozone ministers to a conference call, but only to discuss outstanding issues. There is no question of the ministers giving approval to the bailout.

Juncker has "put the boot in", says ZeroHedge because he has not yet receive the required political assurances from the Greek coalition party leaders on the implementation of their austerity programme. Other "technical work" also remains to be done.

Offering the usual dose of brain-rotting corporate-speak, Juncker's formal statement reads: "It has appeared that further technical work between Greece and the troika is needed in a number of areas, including the closure of the fiscal gap of €325 million euros in 2012 and the debt sustainability analysis."

Once again, therefore, the hang-up is this pitiful sum, which says that there is no serious intent to solve Greece's problems. This piece of meat is being hurled off the sledge to the wolves.

Understandably, the Marxism site is declaring that Greece has reached a "pre-revolutionary situation", but the Greeks themselves have no doubts as to the identity of their tormentors – the Germans. The Financial Times thus tells us: "Greeks direct cries of pain at Germany", reporting rioters burning the German flag in street protests and a demonstrator defacing the façade of the Bank of Greece, the central bank, so that it reads "Bank of Berlin" (Raedwald has the images). 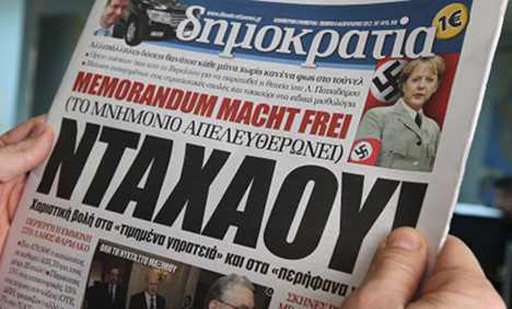 Most shockingly, it says, a rightwing Greek newspaper depicts Angela Merkel in a Nazi uniform above the headline "Memorandum macht frei" – "an allusion to the memorandum in which Greece's foreign creditors demand more austerity measures and to the Auschwitz slogan".

Notably though, the Greek "street" is not blaming the EU commission or the "colleagues" in general – the ire is being directed at the Germans, thus building on the thesis that Merkel's intention is to force the Greeks out of the euro. And at this rate, the end cannot be far away. The momentum seems to be such that there can be no turning back. And if there was any doubt at all, Mary Ellen Synon cites Charles Dumas at Lombard Street Research.

"The Greek debt problem is now beyond solution within the euro", he says. "If it does not leave the euro, on the optimistic assumption that the euro does not destroy Greek democracy, its debt write-off will eventually be 100 percent anyhow, with continuing subsidies needed".

Time and time again, it has looked as if the end is nigh but now we really do seem to be getting there. Ambrose seems to have reached the same conclusion, noting that "the tone of recent comments from Germany, Holland and Finland suggest that the creditor powers have already decided to eject Greece, causing great bitterness in Athens".

Meanwhile, Spiegel online reminds us of the human cost. Aid workers and soup kitchens in Athens are struggling to provide for the city's "new poor", it says. Since the economic crisis has taken hold, poverty has taken hold among Greece's middle class. And suicide rates have nearly doubled.