The realms of stupidity 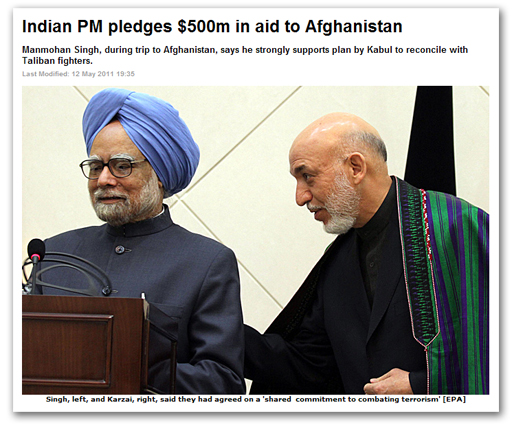 Even the Tory Boy Blog is beginning to realise there is something not quite Kosher about The Boy. But of all the stories over the weekend, perhaps the most damaging is the one on aid to India, a story which is set to run and run.

In this context, I liked the article by Sue Reid in the Daily Mail, citing Barun Mitra, director of a New Delhi-based political think-tank, the Liberty Institute. "I am really surprised that your aid officials endeavour so hard to continue their presence in India. Is it really to help Indians, or is it to justify their own existence?" he asks.

One suspects that institutional self-maintenance is indeed a major driver here. And, apart from an inducement to support the Eurofighter sales effort, about which Autonomous Mind has some interesting comments, I think there is a strong climate change agenda here. Overall, there is a huge amount spent on climate change issues, with £10 million going directly to Pachauri's in-house operation and pension fund – TERI.

But, I suspect, the underlying objective here is to keep India on-side, not least because of its relations with China, in the hope that the Indian government will pursue the British agenda when it discusses climate change issues with its Chinese counterparts.

In and amongst all this, though, what you never get from the British media is how much India is giving to Afghanistan in aid, currently $2 billion. You have to go to Aljazeera to find that out. And that aid - in my view is being spent in ways that are inimicable to British interests.

Bizarrely, the $2 billion paid to the Afghanis is roughly equivalent to the amount the UK pays India, allowing suggestions that we are paying for our own suicide. India's foreign policy interests and objectives are not ours, yet we are in effect paying to promote them.

Altogether, then, this represents one of the most clumsy – to say nothing of unpopular – British initiatives, and one that cannot help but rebound on The Boy. If he allows this to continue, he will be entering the realms of stupidity.