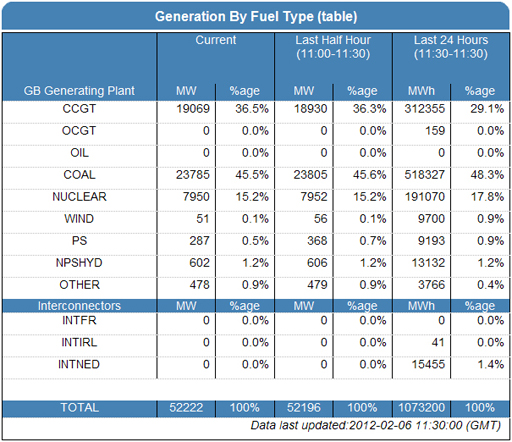 Yesterday, Autonomous Mind reported wind at 570MW or 1.3 percent of total generation. At the time of writing, however, it is even better, at 51MW, representing a magnificent 0.1 percent of the total, reported at 52.2GW (see above - source, BM Reports).

Coal, incidentally, is running at 23.8GW, representing 45.5 percent of total generation, as against gas at 19.1GW, or 36.5 percent of generation. It is usually the case that, in cold spells, coal-fired station take a thrashing. Without that capacity, we would be surely running out of electricity. And one thing for sure, wind would not be picking up the load - and nor indeed would the Kermits be any help. We're not getting anything off the interconnectors at the moment.