Foreign aid is "bold and right"

From the man who effectively destroyed the Conservative Party over forcing through the EU's Maastricht treaty, we have the epic fail himself, John Major, telling his Europhile successor what a jolly good chap he is to give all that money away to the fuzzies. 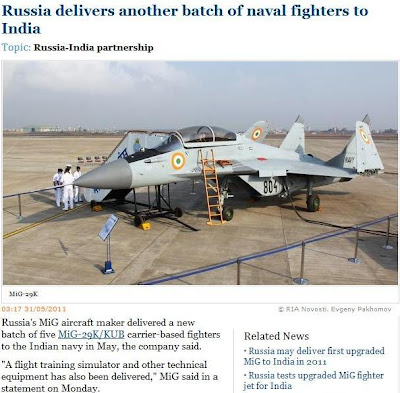 And, just in case there is any doubt at all as to the value of such aid, extracted from the pockets of unwilling British taxpayers, The Indian military would like to say thank you very much for the "bold and right" decision to give the Indian government £1.3 billion.

No doubt that has helped underwrite a contract with the Russians for the supply of 12 single-seat MiG-29Ks and four two-seat MiG-29KUBs to India, signed in January 2004, part of a $1.5-billion deal to deliver the Admiral Gorshkov aircraft carrier, currently being retrofitted in Russia for the Indian Navy.

India's first four MiG-29Ks and MiG-29KUBs officially entered service in February 2010 and, in March 2010, Russia and India signed a $1.5-billion contract for 29 additional MiG-29K Fulcrum-D carrier-based fighter jets to New Delhi. The start of the supplies is scheduled for 2012.

The contracts for the jets also stipulate pilot training and aircraft maintenance, including the delivery of flight simulators and interactive ground and sea-based training systems.

And with the UK so generously doshing money that the Indian government would otherwise have to pay, buying these useful toys just got so much easier, giving India a capability, incidentally, that the Royal Navy no longer has - truly a "bold and right" decision.