Look in the mirror? 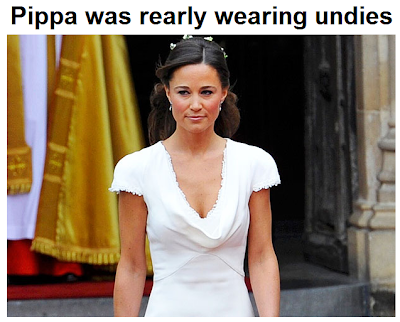 Having given over her top slot to rumours about whether Pippa Middleton was wearing knickers at the Royal Wedding, columnist Carole Malone in The News of the World then lambasts Cameron over the circus issue.

We're fighting two wars we can't afford and we've got a Euro debt crisis that could see off the single currency yet Downing Street is busying itself issuing threats against an MP who wants to ban wild animals in circuses, she opines.

"Hell's teeth! Hasn't our Prime Minister got more pressing matters to attend to than trying to stop circus animals (just 39 are left in Britain) seeing out their days at some nice sanctuary in Devon", she then declares – demonstrating a staggering lack of self-awareness. She should really have been looking in a mirror when she wrote that.

Catherine Bennett, in The Observer, however, doesn't stoop to knickers, but makes a similar point: "if you're going to rebel, find a better cause". Yes, the welfare of circus animals is a concern, she says, but not more important, say, than elderly people in care homes.

Cue Booker, although not about care homes – we did them ages ago, and may well return to the subject – but about the "stolen children" saga. The media's reluctance to get involved on this issue is in stark contrast to the amount of space devoted to the fate of 39 animals, knickers, slebs and sundry other trivia which swamp their output.

Then, some stories don't even find their way into the Booker column, such as the bizarre fate of Steve Headley, an ex-policeman, who had lived happily for nine years with his partner and her two children.

Unfortunately for them, last summer, they had attended a "naturist" holiday camp in Norfolk, as they have done before, where Headley briefly helped a friend of his 10-year old stepdaughter by rubbing sun-tan oil into her shoulders. Although this was in full view of 20 other children and adults, including the camp's child protection officer, one camper reported the incident to the police.

Headley was arrested, held in a police cell for 24 hours, then released without charge because the police found he had done nothing wrong. When the family returned to Staffordshire, though, they were visited by social workers, who informed Headley's partner that her children would be taken into care unless she signed a document agreeing that he immediately left the family home and had no further contact with her children.

Terrified, she signed and Headley left the house. Because he had nowhere else to go, he decided that, until the matter was resolved, he would live in his car. Thus began a nightmarish cat and mouse game.

Although no legal proceedings were initiated, the social workers continually intervened in the family's life. The mother was sent for four "assessments", Headley for three. The children were interviewed at school, in full view of staff and other pupils.

The social workers – who clearly believe that any connection with "naturism" is unnatural - came up with ever more absurd insinuations, These included a photograph of Father Christmas with his hands on the shoulders of two young girls, whom they claimed was Headley, It was in fact a school photograph taken at a school Christmas party. The bearded figure was someone else entirely.

Repeatedly the social workers have told his partner that they were discussing taking her children into care, but they have still initiated no legal proceedings. Although he continued to live in his car for a year, Booker last week advised him that the document signed by his partner had no legal force, which astonished them. He was therefore fully entitled to return home. On Thursday the family, reunited for the first time in a year, enjoyed a celebratory dinner. 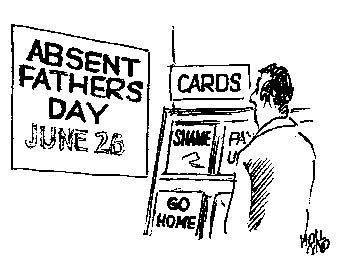 Recently, Cranmer did a story about another unhappy father, deprived of contact with his son – but these are not stories in which the media are interested, or will even allow in their pages. In fact, as we see with Cameron lauding the single mums and attacking "absent fathers", neither the politicians nor the media are even on the same planet. All we get from them is the likes of this insensitive Spectator cartoon (above), which completely miscasts a growing tragedy.

Slowly the disgust of people is growing, as awareness spreads that the political classes have lost the plot. The hits on this and other independent blogs attest to that dissatisfaction with the MSM and its political friends. Numbers are everything in this game and even if there are too few of us yet to make an army, we are increasing in strength. And Pippa Middleton's knickers are helping us on our way.