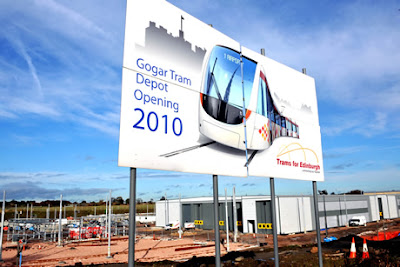 
The leader of Edinburgh council sparked fury yesterday when she dismissed the capital's tram fiasco as a "small glitch". LibDim council chief Jenny Dawe played down the soaring cost of the project despite admitting it would hit services in the city.

Speaking on the BBC's Politics Show, she said: "I don't think Edinburgh is a laughing stock. I think we'll get through this, we'll get a tram. In the run of things, this will be a small glitch on the way there."

Did I not write yesterday of "Scottish Practices", defined as "wholesale looting of the public purse on grandiose schemes, enriching contractors, consultants and officials, without care or remorse"? Well, there's your example.

Another one from the same stable is the M-74 extension, which opens tomorrow. With a price tag of £692 million - or £2,000 an inch - it is Scotland's most expensive road. Yet the Scottish Government has trumpeted the £445m construction contract - which excluded the cost of decontamination and land purchasing - as being completed early and under budget.

In fact, it should have been finished three years ago, and when initially given the green light in 2001 was estimated to cost £245m.

You cannot deal with this by rational argument – these people are not rational. And a political system that allows this cannot be salvaged. The decay has gone too far. We have to start again.