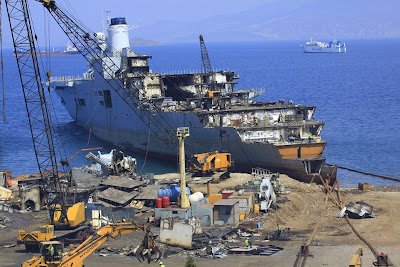 I am extremely reluctant to get misty-eyed about the demise of the Harrier. It was great fun to watch at air shows but, as a modern tactical aircraft, it has limited range and endurance, limited capability and was extremely expensive to operate.

Despite its Falklands fame – where the real star of the show was the AIM-9 Sidewinder missile - its real utility now was that it could operate off our pretend aircraft carriers, giving the impression that we still had a credible naval aviation capability. I'd sooner see Tucano B-1s flying off the deck – if they were able.

However, even that little offered by the Harriers was better than nothing – hence The Mail rubbing in how bereft we are, picturing the Invincible being scrapped in a Turkish breakers. We can't even scrap our own ships these days, it seems.

Somehow, becoming a "development superpower" and keeping Bill Gates happy doesn't really cut it. The Cleggerons have a lot to answer for.