Greenpeace in our time 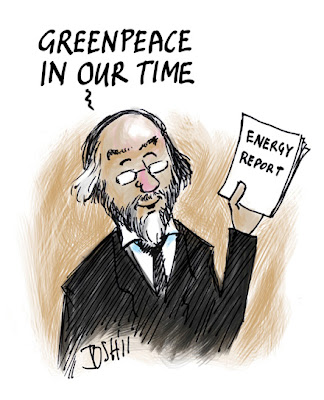 The joke is too good to miss, as Booker picks up on the IPCC "Greenpeace" controversy – or should we be calling it "Greengate". And Josh has risen to the occasion, putting Pachauri in same frame as Chamberlain, waving his piece of paper and declaring "Greenpeace in our time".

That basic issues are well covered, but Booker then focuses on the "even greater scandal" - the astonishingly one-sided nature of the rest of the report, which reads less like a scientific document and more like a propaganda puff for the world's renewable industries.

But, of course, that is precisely what it is – the IPCC being a body which masquerades as a scientific institution in order to promulgate an agenda which keeps its paymasters happy.

Their infatuation with the chimera of wind power ranks alongside the creation of the collapsing euro as one of the supreme follies of our age, which makes it a pure delight that Pachauri's "piece of paper" should coincide with those warnings from an array of US scientists that the current dramatic decline in solar activity might herald the approach of a "mini-ice age".

But, says Booker, as the great global warming scare continues to fade away, the real problem is that our politicians have so much collective ego invested in this delusion that, even when hell freezes over, they will still find it impossible to admit they got it wrong.

Unfortunately, hell freezing over is a downstream event. Currently, as long as the IPCC can keep the international caucus well supplied with reams of printed matter which the politicians can wave in the air, Pachauri will stay in favour and the bird choppers will keep turning – on the occasions when there is useable wind.

For the moment, then, the politicians see no need to change. Why should they? They have the power, and our money. There is doubtless another piece of paper on the horizon to keep us whingeing, and thus preoccupied, which ensures we will achieve little else.

No wonder Pachauri always seems to have a silly grin on his visage.