Micturition in the same pot 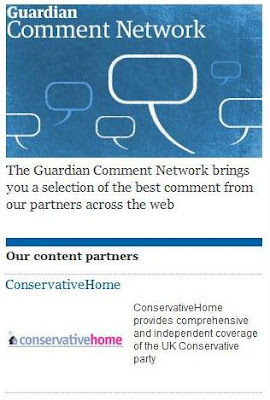 Regular readers will know that I've had my doubts about Tim Montgomerie and his "Uncle Tom" website Conservative Home. Those doubts are now fully supported as we see his blog join The Guardian as a "content partner" – alongside "feminists" and the neo Marxist Left Foot Forwards.

And, to consummate the nuptials, we have a vomit-inducing piece from the self-same Tim Montgomerie, headed "Cameron must start worrying about Europe" - sitting on the Guardian website. It tells us that "David Cameron already has the NHS and crime on his list of challenges. But his Eurosceptic credentials are widely doubted".

This is straight out of the muppet school of politics, the fare of the fool Oborne, and an insult to the intelligence of any reader who can muster more brain cells than Montgomerie has fingers. All together now: Euroslime Dave has no Eurosceptic credentials. He is a rabid Europhile.

However, the main news of this particular post is the marriage of The Guardian and Conservative Home. Had anyone had ventured that this might happen, even a year ago, they would have been dismissed as a blathering madman. But now, impossible things come to pass ... proving once again that the political classes are all partaking in joint micturition exercises, mostly on the rest of us.

As another one sells out, though - corrupting the word "independent" - we need our own voices, much more than ever. At least not being on the ConHome blogroll is now a badge of honour.