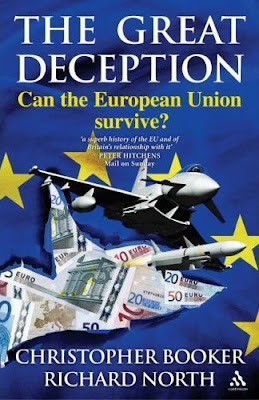 Continuing on, to produce my third piece reviewing the great circus elephant debacle, it occurred to me that, if I was writing a sequel or an update to The Great Deception (which Booker and I are thinking about for the tenth anniversary of its publication, in 2015), Pritchard's debate would probably be marked down as a good illustration of how far parliament had declined under the baleful influence of the European Union.

But what I would need to do, and have not done yet, is show how clearly it demonstrates that decline. For that, we need to look at some of the speeches in the parliamentary debate, starting with Mark Pritchard, and including the input of the minister, Jim Paice, and some others.

Before we go there, though, one has to appreciate that there is considerable history here. In a campaign inspired by PETA, the RSPCA and other "animal rights" groups – supported by the greens and lefties - there has been pressure to bring in a ban on the use of circus animals for some years, the more recent attempts directed at the previous administration and now this one.

Faced with the pressure, the response of the Cleggerons has actually been fairly direct but inept, with Jim Paice, for DEFRA, claiming that EU law prevented an outright ban. In the first of two efforts prior to last week's debate, on 12 May 2011, he had stated:


There have been recent press reports that the Austrian Government have been taken to court for their attempt to ban wild animals in circuses, so our Government can hardly recommend something that might not be legal. I can assure him, however, that the proposals we will bring forward shortly will be tough enough to ensure that animal welfare in circuses is properly protected.

Responding to Gavin Shukerm the Labour member for Luton South, and a co-signatory of Pritchard's motion, he then declared: "Whether we like it or not, this court case is going on in Europe and therefore the British Government could not bring forward a proposal ... that might well prove shortly to be unlawful".

That had the greenies and the animal rights activists scurrying away to do their homework, whence they found that the Austrian claim was not strictly true. Thus, on 19 May 2011 Mary Creagh, Labour member for Wakefield came back to the hapless Paice, who "clarified" the issue, telling the House:


... we now understand that the initiation of court proceedings against the Austrian Government has been delayed, although a case is in preparation and proceedings are expected to commence shortly ... This does not, however, affect our policy ... The very strong legal advice that we have received, which is consistent with the case being prepared against Austria, is that a total ban on wild animals in circuses might well be seen as disproportionate action under the European Union services directive and under our own Human Rights Act 1998. We believe that to have pursued a ban in the light of that legal advice would have been irresponsible.

So was set the scene for last week's debate, and when it came to Pritchard's turn to stand up and make his case, he thus decided to reject the argument that a ban on circus wild animals was prohibited by EU law. Referring to what was coming to be called the "Austrian defence", he went on to observe that:


It is not uncommon to hear of Governments sheltering behind courts in Brussels or Strasbourg, but to hear from Ministers in my own Front-Bench team say that this Government are now sheltering behind a domestic court in Vienna is a completely new innovation.

In full sarcasm mode, he then pursued his own arguments, claiming that the reality was that the Government's Austrian defence was a red herring, given that the European Commission had clearly stated that a ban is a matter for member states alone. It is an issue that English courts decide, Pritchard said, proclaiming:


Surely that is something to celebrate in this age of judicial creep from Europe, and also something to exercise and implement. A ban can be introduced in an English court - without waiting for other European capitals to decide and without interference from Europe, which makes a refreshing change.

Pritchard, the supposed Tory, was then strongly supported by the ghastly Green, Caroline Lucas, who picked up the point about member state involvement, and informed the House that "the European Commission here in London recently wrote a letter to the Captive Animals Protection Society stating plainly, yet again, that the EU considered that the welfare of animals … 'is a matter best left to the judgement of Member States'".

Now things are getting really interesting, because that is indeed the view of the EU commission. But the Ghastly Green does not mention the European Ombudsman. This is left, initially to Jim Fitzpatrick, Labour MP for Poplar and Limehouse, who completely muddies that water by claiming:


The European Circus Association challenged the Austrian ban at the European Commission in 2006, and it lost. It invoked the European ombudsman and it lost. The ombudsman asked the Commission to evaluate whether the Austrian ban on wild animals in circuses was proportionate. The Commission's final opinion of September 2009, as laid out in the documents available in the Library pack for today’s debate, set out why it did not believe there were grounds for an accusation of maladministration and also set out its view on the proportionality of the Austrian ban. It ruled that this was a matter for member states to decide.

It turns out that the Ombudsman's ruling is absolutely crucial. The Commission has bottled out of infringement proceedings against the Austrian ban, quite obviously because it does not want to confront the animal rights lobby. In the Ombudsman's view, therefore:


... the Commission's statement that "animal welfare questions are better left to Member States" seemed tantamount to an abdication by the Commission from its role as guardian of the Treaties in all matters concerning animal welfare and not merely to those pertaining to the present case. As such, it failed to provide a correct, clear and understandable reasoning for the exercise of the Commission's discretionary powers to close the case. The Ombudsman found that in so doing the Commission had committed an act of maladministration.

This is all nicely set out in a press release, where the Ombudsman concluded in a deliciously robust fashion:


As the Guardian of the Treaty, the Commission is obliged to supervise the correct application of EU law in the Member States. After his investigation, the Ombudsman concluded that the Commission had abdicated its role as Guardian of the Treaty. According to him, it should have determined whether the complete ban imposed by the Austrian law constituted a proportionate restriction of the right of free movement. If it were to conclude that this is not the case, the Commission should either continue infringement proceedings or provide the complainant with a valid reason for closing the case.

It is then left for Paice to reiterate the Government's case, and this time he refers to the Ombudsman, making "a damning criticism of maladministration against the Commission, based on the view that it had abdicated its responsibility to maintain the treaties by not interfering in the rights of member states". 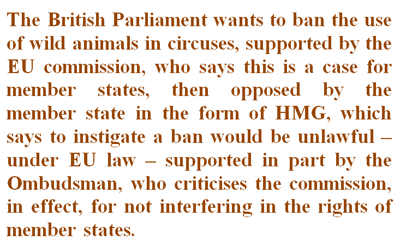 Bizarrely, we now have a situation that you could not in your wildest dreams make up. Let me summarise. We have the British Parliament which wants to ban the use of wild animals in circuses, supported by the EU commission, who says this is a case for member states, then opposed by the member state in the form of HMG, which says to instigate a ban would be unlawful – under EU law – supported in part by the Ombudsman, who criticises the commission, in effect, for not interfering in the rights of member states.

All Paice can do is tell the House that it is ultimately the courts that interpret legislation. Our lawyers have to advise us, he says, not about what the commission's view is, but how they believe a court might interpret the legislation. By "a court", of course, he means the European Court of Justice.

The minister then informs the House that a case has been laid by Circus Krone against the Austrian Government in that country's constitutional court. We know not the outcome, he says, but the fact that that case has been laid supports the legal advice that a wholesale ban may well be counter to section 16 of the EU services directive, and that any subsequent legal challenge would have the same consequences that I have described – i.e., declaring it unlawful.

With that, we shall leave nearly the penultimate word to Caroline Lucas's soulmate, Zac Goldsmith, who told the House he was going to back Pritchard's motion. I hope that colleagues will do the same, he said, if not for the wild animals themselves then "simply to send a message to the public that Parliament exists, and exists for a purpose".

And indeed a message was sent – to the effect that British Parliament, in all its pomp, splendour and might, cannot even ban the use of 39 wild animals in circuses (the number in the UK at the moment), because the British government says it is against EU law, even though the EU commission says it isn't. And the British government, is right ... in law.

But all this was so unnecessary. Had Pritchard any brains at all, he would have known, without all this carry on, the bit that Ministers were struggling to avoid admitting. Animal welfare is an occupied field. As long as we are in the EU, we have no power to legislate. The power has been given to Brussels.

So, to paraphrase Goldsmith, we now know that Parliament exists. But for what purpose, we have yet to discover.