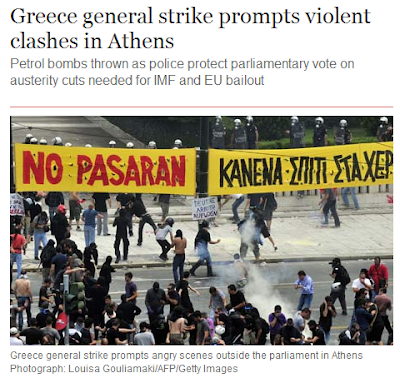 Another day, another riot - but the police seem to have the measure of it. It may be a "general strike", but the uniforms are still out to play, around 5,000 of them, including hundreds of riot and motorcycle police.

So far, they are preventing the encirclement of parliament, the demonstrators having attempted to prevent the politicos voting on the "austerity" measures. Meanwhile, the Finmins can't agree and the euro is "weakening".

Still, though, much of the media is reporting this as "economic" news and relegating it to the business news, even as the contagion begins to spread, with Moody's having placed three large French banks on negative review based on their exposure to Greek debt.

The big joke, though, is that our lot think their strikes are going to save their pensions. They need to lift their eyes over the horizon and see what is coming. When the storm breaks, they will be lucky if they can even save their jobs.