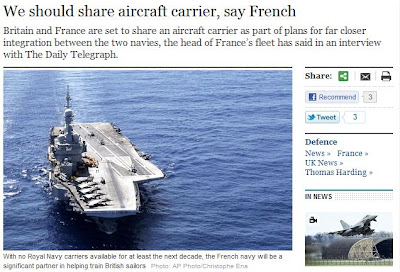 We saw it coming in January 2006, but it goes back to November 1996 and the Bordeaux agreement on bilateral UK-French naval co-operation, in the dying days of the Major administration. Extended by Blair in 1998 in St Malo, we now have three prime ministers: Major ... Blair ... Cameron, all with the same agenda.

And now we move to the end game, the final surrender, as the Anglo-French force paves the way for a fully-fledged EU Navy.

Autonomous Mind also picks up the story. "All this has been planned and delivered, hidden in plain sight of the electorate and the media, yet even now many in the media are still unable or unwilling to connect the dots and explain to our population what our political class has done. They are sickening quislings to a man and a woman".

What more can one say?