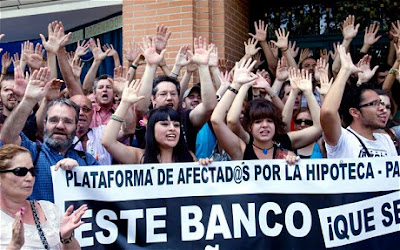 In the first three months of this year 15,450 families were evicted from their homes in Spain over failure to meet mortgage repayments – 36 percent more than the same period of 2010. But there should have been one more family, except that action was blocked by a "flash demonstration" - an intriguing idea and a tactic which outflanks the police. It must surely keep them on edge.

But it is also obvious that the traditional demonstration is alive and kicking in Spain, with reports this week of about 2,000 demonstrators clashing with police outside the regional parliament in Barcelona. There were 36 injuries claimed.

Some politicians could only reach Catalonia's parliament using police helicopters. Scuffles broke out when police pushed back protesters so other lawmakers arriving on foot could get in. The politicians were heckled and at least two were sprayed with paint.

But what is particularly interesting is how in Australia, demonstrations are being planned against the CO2 tax, as opposed to Canada, where they seem to be having hockey riots.

By and large, it seems, the wrong people are demonstrating about the wrong things, even in New York where "tens of thousands" of New York City public employees, teachers, private sector workers and students joined protests against "impending budget cuts, mass layoffs and rising unemployment".

Exactly the same dynamic is being seen in Hungary, where thousands of Hungarians, some dressed as clowns, protested this week against government moves to roll back early retirement benefits for the armed forces, police and firefighters and abolish the system of negotiating with unions.

Nothing of this, though, has a revolutionary feel about it. Mostly, we are seeing self-interested public sector groups attempting to protect their own privileges and income. Only the demonstrations in Australia really stand out – seeking to block a new tax rather than maintaining existing government spending, although the Saudi women drivers embody more than a hint of rebellion, where getting a traffic ticket becomes a revolutionary act.

If you want real rebellion, though, go to Syria - were the costs are high, as Syrian troops shoot dead 16 protesters. Since the protests erupted in mid-March, President Bashar Assad has unleashed the military to crush street demonstrations. Human rights activists say more than 1,400 Syrians have been killed and 10,000 detained.

Developed western countries, though, seem to have lost the art of truly political protest, the people seemingly more interested in their own well-being than any specific points of principle. Unrest, therefore, is unfocused, predictable and lacking widespread popular appeal. If there is revolution in the making, it is not yet apparent in the streets. As yet, it appears to be on hold.