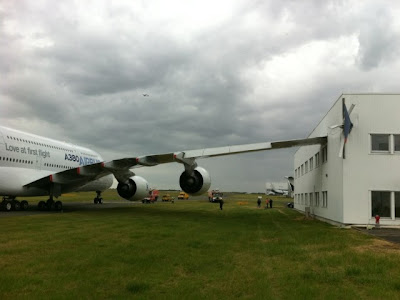 Yesterday, to compensate for bending one of its prize exhibits at the Paris airshow (pictured) and having to stand down the A-400M display because of a "gearbox failure", Airbus has received an order worth $7.2 billion for 72 aircraft from Indian carrier GoAir, the latest in a series of Indian airlines scrambling to meet growing demand in Asia's third-largest economy.

Today, however – according to the Financial Times (no link), China has rained on Airbus's parade, blocking a multi-billion dollar order for ten Airbus A-380s in what is termed "a sharp escalation of Beijing's protests against Europe's plan to bring international airlines into its emissions trading scheme from the start of next year".

When the scheme comes into force, airlines operating in Europe will have to buy carbon credits from the EU's Emission Trading Scheme to cover each ton of CO2 they emit in excess of a cap set by the EU.

This could cost Chinese airlines as much as 800 million yuan ($123 million) next year and 3 billion yuan ($461 million) by 2020. For the aviation industry as a whole it is estimated that the EU cap could cost it up to $2 billion in 2012, which analysts say will drive carbon credit prices as well as the cost of flying.

Hence, we now see China taking action. Its order was supposed to be coming from Hong Kong Airlines, worth at least $3.8bn at list prices, and was due formally to be announced at the Paris air show earlier this week. But Airbus learned over the weekend that the agreement was being blocked by Peking and the announcement did not go ahead.

Crucially, these are by no means the only orders taken hostage by the Chinese. "The A380s are the first", says one Airbus executive, adding there were other deals with Chinese carriers in the pipeline, and others with Hong Kong. The bottom line, therefore, could be far more than today's figure, while other countries may follow suit.

Interestingly, Tom Enders, Airbus chief executive, recently teamed up with a number of airlines to write to EU climate commissioner and professional moron, Connie Hedegaard, warning her that it was "madness to risk retaliation" from such influential players as China over the issue.

Needless to say Hedegaard, alongside José Manuel Barroso, deployed a dual digit response, answering that Brussels has no intention of caving in to such threats. To do so would set a worrying precedent, said the Hedegaard, because "it is up to the Europeans (sic) to decide European legislation".

UKIP, which is the first political party to respond to the announcement, has said the obvious, that "the EU should stop chasing the chimera of Climate Change, and let us concentrate on real people, real jobs and real lives". It, like the rest of us, is mindful of the constant claims of "green jobs" arising from climate change measures – but no one ever thought they would be going to Boeing.