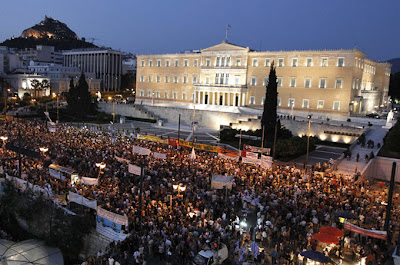 Greek Prime Minister George Papandreou has, we are told survived a confidence vote in parliament, "winning a gamble on his government's survival and the danger of a devastating debt default".

That is how the Mirror sees it, and you won't read anything very different in the rest of the media. They have all bought into the same fantasy, that there is some sort of settlement. But all Papandreou has done is buy a little time, paving the way for hugely unpopular measures which are going to cause endless grief and solve nothing.

Meanwhile, it is not only the Greeks who are talking revolution. Right under our very noses, another one is being proposed - one potentially every bit as dangerous as what is happening on the furthest edge of Europe.

This is Charles Secrett, calling for a green revolution, and he has a better grip on the realities of power than many of the wannabe revolutionaries on our side – but also some curious blind spots. But there is competition on the block – interestingly, outside the traditional party political process.

This is too important for a "quickie". I'll look at it in detail later today.