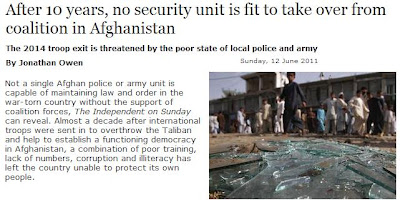 The "grim official assessment" of the capabilities of the Afghan National Security Forces (ANSF), says The Independent on Sunday is "a major blow" to the hopes of a troop withdrawal by 2014.

The fiction, of course, is that the ANSF will be able to start taking the lead in fighting the Taliban from next month. The commander of Nato's mission to train the ANSF has admitted the task will not be complete until at least 2016 – although that is almost certainly another fiction.

And this comes after a decade in which tens of billions of dollars have been spent building up the Afghan army and police. Then, when you have a policy based almost entirely on delusion, occasionally it will bite back.