The prattle of tiny brains 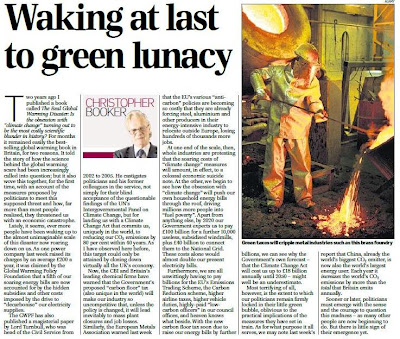 With a speed undiminished by an increasingly laden bandwagon, Booker takes on the energy crisis once again, noting how politicians remain firmly locked in their little green bubble, oblivious to the practical implications of the measures they have set in train.

Sooner or later, he tells us, politicians must emerge with the sense and the courage to question this madness – as many other people are now beginning to do. But, he concludes, there is little sign of their emergence yet.

In fact, there is no sign at all, witness the infantile comments from the embattled Chris Huhne in today's Observer, blithely advising us that we should not accept the increases "lying down" but "hurt" their supplier by finding cheaper alternatives.

"Consumers don't have to take price increases lying down," he says. "If an energy company hits you with a price increase, you can hit them back where it hurts – by shopping around and voting with your feet."

Sadly – infuriatingly – though, we are not allowed to shop around for a new government and vote at all – with our feet or anything else. But it would make little difference if we could. As with the energy suppliers, the politicians are all indulging in common receptacle micturition (CRM).

And here, it is no good looking to the energy suppliers for salvation. As we see from Roger Carr chairman of Centrica, his thinking is constrained by the orthodoxy as he warns that steep energy price increases are inevitable.

Households, he says, should be prepared for further rises in their power bills of the magnitude of Scottish Power's 19 percent increase in gas prices and ten percent hike in electricity tariffs, blaming the pressure on wholesale prices.

"Moving wholesale prices have been very material, well over 20pc, in recent months," he says. "In those circumstances, it is just a commercial fact that those things convert into price increases".

Scottish Power, spreads the blame a little wider, talking about the combination of the wholesale price increases, rising transmission charges from National Grid and the cost of complying with the government's "carbon reduction" legislation introduced to combat climate change.

But what is not being acknowledged is that the reason we are so prone to fluctuations in energy prices – which translate almost immediately into price rises, but rarely price reductions – is a chronic and continuing failure of energy policy.

The desperate need for a coherent policy we noted in September 2008, but it was not to be. Thus while Booker finds the "most terrifying of all" problems is the way politicians are locked into the "green bubble", he is being too kind.

Perhaps the truly most terrifying of all problems is, at one, the long term failure of successive governments, going right back to the last war, to develop a coherent energy strategy, and then of this current administration – and before that the Conservative opposition – to recognise this as the key problem, and start working on urgent remedial action.

For sure, the "green bubble" is blinding our current crop of political dwarfs to the most effective solutions, but there is no indication that, even without their green-tinted spectacles, they would be able to do any better than their predecessors.

Individually and collectively, our political classes have lost the ability to create effective policy and now like pre-teens in a class without their teacher, all we hear is the prattle of tiny brains.