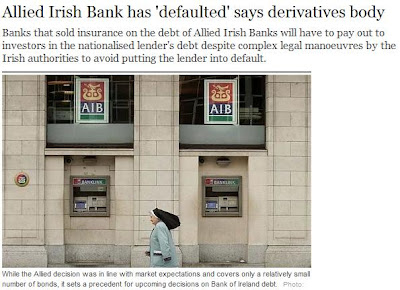 You know how, moments before a building collapses, bits usually start falling off it? Well ... it's happening now says The Failygraph. Banking Times seems to be agreeing. The Irish Independent, today, seems to support their line, which is expanded upon by The Boiling Frog.

Zerohedge, however, is less than impressed, not least as it reported on it last week, with this:


Allied Irish Banks PLC has officially experienced a Restructuring Event. CDS settlement to proceed next. And yes, thanks to daily variation margin on CDS this means absolutely nothing, and should the cash/physical settlement auction clear tight of prevailing prices depending on where CTD bonds trade, it means CDS sellers will (gasp) receive daily margin cash at the end of the day. Yes, contrary to AIG-related stigma, selling CDS on an entity does not mean an automatic default for the sellers of protection. But that won't prevent those who have no idea how the CDS market operates to spread more BS stories, especially as relates to Greek, then all other PIIGS, CDS.

Delicious ... that's exactly the sort of thing I would have written if I knew what I was talking about ... which I don't. We're still domed though.