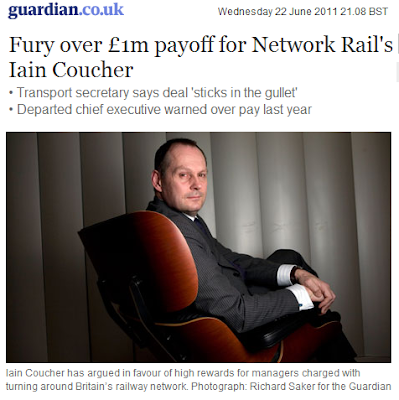 Network Rail has handed former chief executive Iain Coucher a £1m payoff. This includes a year's pay in lieu of notice, after the man had been unceremoniously dumped, under a cloud larger than the Hiroshima mushroom.

The decision to dispense with his services centred on his "James Bond lifestyle" and allegations that he enjoyed extravagant pay and perks at taxpayers' expense on top of his £600,000 salary. Coucher and his business partner Victoria Pender were accused of being paid up to £180,000 every three months for "unspecified services" on top of salaries, pensions and bonuses.

Despite this, Croucher also gets a settlement related to the company's long-term incentive plan and, what is more, his fellow executives are also expected to receive sizeable payments under the plan. Transport secretary Philip Hammond has condemned the payment, warning that it will "stick in the gullet" of taxpayers and farepayers.

And well he might. But he and his ilk are going to do precisely what about it?