Down in the underpants laundry 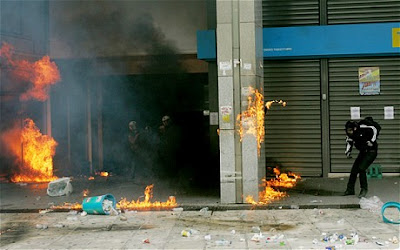 If Oborne spent a little less time brown-nosing and a little more looking at what is happening in the wider world, it wouldn't be his proboscis that was discoloured and rather odiferous.

Such is the Greek situation, where the IMF is playing very dangerous games, threatening to withdraw funds from Greece completely and trigger a default, unless Germany comes up with the dosh for a second bail-out. And, although this ploy has worked for the moment, it is not the sort of thing you want to be repeating if you are into life-enhancing experiences.

You have to laugh, though, when the Guardian earnestly tells you that senior officials in Brussels are "worried" that time is running out. Papandreou's attempt to form a government, win a vote of confidence and then drive the austerity package through parliament could take longer than scheduled, says the paper, jeopardising the planning in European capitals". Worried? Not exactly the word I would use when the underpants laundry is on overtime – see Oborne, passim.

Mind you, the Guardian's worries are a little closer to home, with the news and media group declaring a £33 million loss from its last financial year. The famous Alan Rusbridger is having to implement his own austerity programme. He has already cut 203 jobs during the last year and it looks as if up to 175 more could be for the chop. No wonder the paper is looking for "content partners". How good of ConservativeHome to oblige, with its own version of a bailout.

However, one weeps rather than laughs at the Failygraph. Having decided this could be Europe's "Lehman moment", with Greek default poised to "send a tsunami" through the eurozone, it consigns its news and analysis to the business section while in the op-ed, Oborne prattles about Cameron's "vision" that he "set out so magnificently in the wake of last year's general election".

We do not recall this "magnificent vision" accommodating the fallout from the wreckage of the eurozone, much less the difficulties of dealing with another "Lehman moment", while fleecing the taxpayer in order to turn us into a "development superpower". But there again, we are not the ones who are pouring millions and billions – soon to be trillions – into a black hole of debt.

There must be a lesson in there somewhere for us bloggers down in the underpants laundry. Perhaps if we too could lose a cool £33 million this year, we could manage to drop our standards sufficiently to match the Guardian. With a billion or two, we might even be able to get down to Oborne's level – difficult, I know, but for that sort of money, it would be worth try.