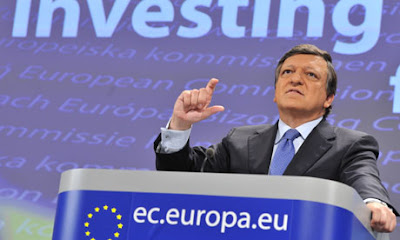 "The notion of Cameron being a strategic genius who will throw off his cloak of Europhilia and reveal his inner democratic nationalist is laughable given the catalogue of pro EU actions to date. So it seems the ignorance is all pervasive and the effort to make us buy into it is being reinforced at every opportunity. The gullible constituency where this idea is being swallowed is obvious to all who look – the British media".

That is quality writing from Autonomous Mind, commenting on the latest report in The Daily Mail which parades the EU's so-called "power grab", the one that even seems to have the loss-making Guardian slightly troubled.

The Mail has "David Cameron" facing pressure to veto the latest "ludicrous" cash demand from Brussels after it announced plans to slap three new taxes on Britain, after the EU Commission – so we are told - "revealed budget demands which would cost UK taxpayers £10 billion".

However, we are not talking about the "budget" here, even if a commission official triumphantly parades it as "a trillion euro budget". It is in fact the EU's Multiannual Financial Framework for 2014 – 2020, the manoeuvring for which got underway yesterday when Barroso slime announced the commission proposals at a press conference, telling us that "the European Union works everyday to help realise the aspirations of our 500 million
people".

The hubris of these people knows no end, but you would not get any sense of this from the Mail, which now no longer attempts to educate its readers. Instead, like the parochial British media always does, it pins a Union Jack on its report, and couches it in domestic terms, the ultimate insult to its readers, whom it believes are not interested in EU stories unless there is a direct British dimension.

This is a charade that is going to run and run but, in the end, Cameron will do a deal. He has faith in the EU and will, therefore, deliver another sell-out. So the wheel will go round and round. It is not going to stop until we decide to stop it.