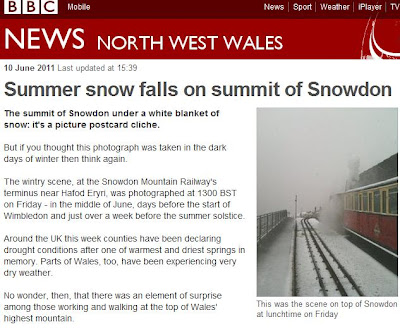 An unremarkable piece of news, you might think, even if it is interesting enough in its own right. But it takes on an extra special significance when you recall one of the BBC's earlier efforts, published in January 2007, warning that the snow on the summit was going to disappear forever due to global warming. 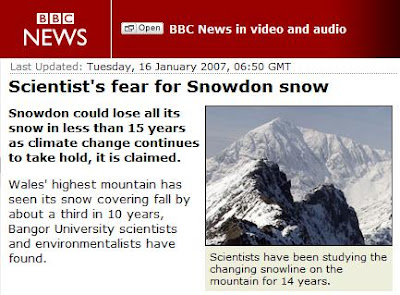 But there was a lot of global warning scaremongering about that year, with the local paper pitching in, as the local assembly environment minister attended an exhibition showing photographs ten years apart, purporting to show a progressive decline in snow cover - despite reports of heavy snow in the winter of 2001. 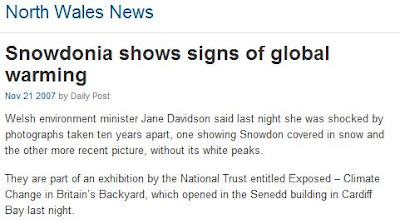 In fact, though, they'd been at it for some years, witness this 2004 report by Richard Savill in the Failygraph, giving us the same message - the "snow" in Snowdon was on its way to oblivion. 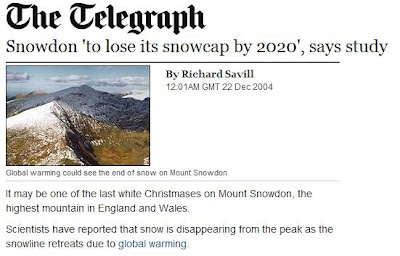 Of course, early 2008, it had all changed, with late snow on the mountain, Picked up also by Booker, and by early 2009 the egregious Savill was having to report the unfortunate incident below. 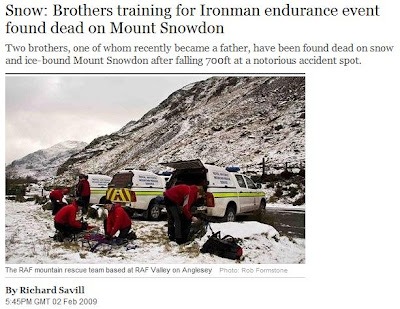 By late November we were seeing early snows, after earlier complaints of 70 days lost to snow and bad weather, in constructing the new peak-top café. Then, as Booker informed us, we had snow over the winter of 2010, and it was "waist high" in snow in the December. Now we have snow in June. And in Yorkshire yesterday - and today - we had the central heating on.

Which brings us back to the egregious Richard Savill, with a weather report. How interesting it is that there is no mention of global warming or climate change ... just weather. 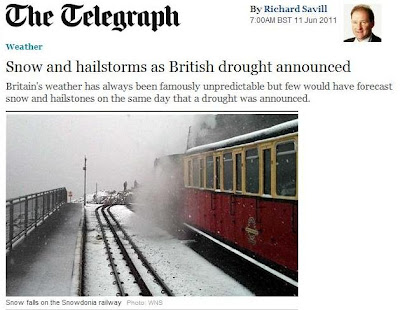 Terrible stuff, this "global warming" - it puts a special substance in the air (or water - no one really knows which), that turns journalists, politicians and many scientists into complete and utter fools.