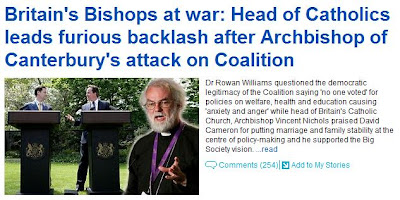 Linking in with the previous post, we now have a furious backlash to Williams's point about the coalition, to the effect that they weren't voted in to do what they are doing.

I sense, though, that Williams is still locked into the old paradigm, where established political parties have clear values, set out their stalls in their manifestoes, whence people vote for them and the winner goes to work on implementing its manifesto.

Needless to say, that no longer applies, but with the coalition it has got even worse. The essence is that whichever parties manage to stitch up a parliamentary majority after an election then assume the license to rule as they think fit – no matter what anyone else, and particularly the voters, might think. 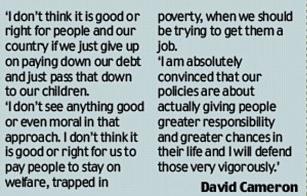 This may be democracy, Jim, but not as we know it. It is no more rule by the demos than any more malign form of dictatorship.

Predictably, though, the ever-smooth and thickening Cameron misses the point (see response, above right), arguing about the policy line the Cleggerons have adopted – and not the important issue of the lack of democratic accountability. Like so many of his ilk, he runs away with the idea that because he and his coalition MPs are elected, he runs a democratic government.

And, as always, there lies much of the problem. We have a pretend prime-minister, supposedly in charge of a democratic government, that actually isn't, failing completely to understand the failures of the systems over which he nominally presides.  Thus does he prefer to discuss the exercise of power, but not its nature or the accountability of those who wield it.

Interestingly, it takes a leftie Archbishop to tell him the system is wrong, but probably Williams no more understands his own point than does Cameron, a question of the faith leading the blind ... to perdition.