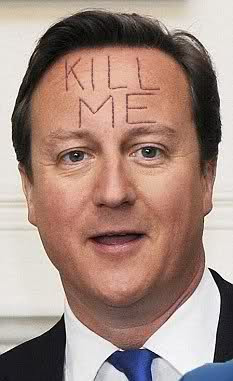 Demonstrating quite how out of touch Cameron is on this aid issue, we see 1505 comments (and counting) to the Daily Mail article which we picked up here. Nearly all of them are hostile, one example (extract) here:


You got this issue very, very wrong Mr Cameron and I fear it will haunt you for a very long time yet to come. Obviously you are out of touch will the general mood of the Electorate in my view and I hope you will pay a heavy price for your dictatorial approach to the subject.

And here is another one ...


I've just been to see my bank manager. I told him there's no money in my account and my overdraft is up to its limit. I also told him my credit card are at their limit but that I wanted to borrow more money. He asked me what I wanted the money for and I told him I wanted to give it away. He told me I was mad and closed my account immediately and cancelled my credit card. He also told me I was stupid and reckless. Cameron just doesn't get it does he?

It is the sheer, unremitting arrogance that sticks in one's craw. He thinks he is right. Thus, what anyone else thinks simply doesn't matter. But it goes even deeper. Last night, he was heard on ITN to refer to "my citizens" back in the UK. Yet, if you ripped out the throat of this patronising slime, with his dying breath he would be wondering what he did wrong.

There is something very wrong here, something fundamentally wrong with our constitutional settlement that allows politicians to behave in this way – with no mechanism to bring them to account.

But do these fools not realise that, if they shut down all the mechanisms of political discourse, and detach themselves so completely from, popular sentiment, the only outlet left is violence? Their armoured limousines, their gun-toting thugs and their riot police will only go so far.