The circus elephant in the room 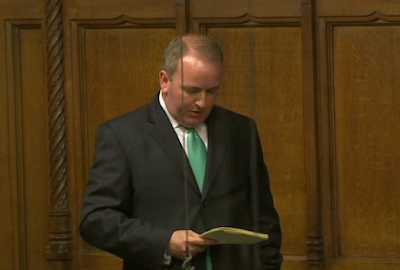 The future of Europe's economy hangs in the balance and our MPs were debating banning circus animals yesterday afternoon. It was only a "take note" motion, fronted by Mark Pritchard, Tory MP for the Wrekin, so it had no legislative effect. But the real stupidity of the debate was that it could not have any effect. This is a matter of EU competence.

Nevertheless, MPs from all sides of the House rallied round Pritchard - who claimed that Downing Street tried to bribe him with the prospect of a government job to get him to change his position – and supported the motion without a division.

In the House, the call for a ban was opposed by Agriculture Minister Jim Paice. He said he shared the views of MPs concerned about the use of performing animals, but warned there could be "legal challenges" to a ban as proposed by Pritchard.

Opening the debate, Pritchard described the government's behaviour as "mysterious", and said he had initially been offered a "pretty trivial job" if he agreed to drop or amend the Commons motion calling for a ban. He also claimed he had received a call from the prime minister's office, telling him that David Cameron would look upon it "dimly" if he pushed for a vote on strengthening protection for animals.

This provoked an extraordinary response from Pritchard who, in rejecting the blandishments and threats, told the House:

There might be some people with other backbones in this place, on our side and the other side, who will speak later, but we need a generation of politicians with a bit of spine, not jelly. I will not be bullied by any of the Whips. This is an issue on which I have campaigned for many years. In the previous Parliament I had an Adjournment debate and I spoke in the passage of the Animal Welfare Act 2006. I have consistently campaigned on this issue, and I will not kowtow to unnecessary, disproportionate pressure.

That may be the case, but one has to observe that his background most certainly does not confer on him any brains. Dim even by Tory standards, Pritchard should know that when the government acts in such a "mysterious" manner, there is usually one very good reason – the European Union.

The problem this idiot has is that legislation on the welfare of circus animals is an occupied field under EU law, which means that while there is no specific EU legislation on the issue, the UK cannot itself pass legislation without the approval of the Commission. This, it would be most unlikely to get, as the Council is already on the case with a declaration on animal welfare, as part of its general policy review on this issue.

That it is an occupied field is demonstrated by Commission Regulation (EC) No 1739/2005 of 21 October 2005, laying down animal health requirements for the movement of circus animals between Member States.

As to an outright ban on "ethical" grounds, there are the underlying treaty principles of the free movement of services and freedom of establishment. This means that, under internal market provisions, even if the British government could ban UK registered circuses from using wild animals (which it cannot), it could not prevent enterprises from other member states from displaying performing wild animals. Hence the "legal challenges" alluded to by Paice, if a ban was imposed. They would come from circus owners as well as the Commission.

Altogether, then, Pritchard and his supporters made complete fools of themselves, but so did the minister – displaying the classic inability, common to successive governments, to admit how much power they have subcontracted to their head office in Brussels. And how desperately sad it is that not a single MP was bright enough to spot that elephant - not in the room but, rather appropriately, in the circus. The whole thing is just an idle charade.