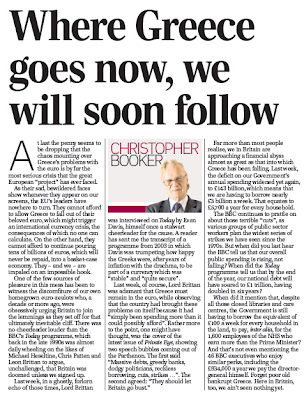 Actually, it seems to be dropping, according to Booker, but at last there does seem to be some recognition that Greece's problems with the euro is by far the most serious crisis that the great European "project" has ever faced.

Unlike me, Booker watches the idiots' lantern occasionally, and observes that, as their sad, bewildered faces show whenever they appear on our screens, the EU's leaders have nowhere to turn. The "colleagues" cannot afford to allow Greece to fall out of their beloved euro, which might trigger an international currency crisis, the consequences of which no one can calculate.

On the other hand, they cannot afford to continue pouring tens of billions of euros, which will never be repaid, into a basket-case economy. They – and we – are impaled on an impossible hook.

One of the few sources of pleasure in this mess has been to witness the discomfiture of our own homegrown euro-zealots who, a decade or more ago, were obsessively urging Britain to join the lemmings as they set off for that ultimately inevitable cliff, says Booker, then offering a narrative about the BBC's Today programme.

But that is very small compensation when you see what HMG is up to, according to The Observer. Despite the Boy claiming "victory" in getting Germany to agree that the European Financial Stabilisation Mechanism will not be used, thus limiting UK contributions to the bailout to its IMF contributions, it seems other dirty dealing is afoot.

The treasury, we are told, is urging British banks to take a hit, cooperating in a "soft" restructuring of Greek bond debt, rescheduling something like £2.5 billion of debt, taking below market interest rates. That may or may not work, but both Moody's and Fitch have indicated that any soft restructuring will still be regarded as a default.

Either way, therefore, the British taxpayer is going to be screwed - although Tim Worstall isn't too worried about the Bond "haircut", given that the City gave out £8 billion in bonuses last year.

Nevertheless, as Booker reminds us in his column, we in Britain are approaching a financial abyss almost as great as that into which Greece has been falling. Last week, the deficit on our Government's annual spending widened yet again, to £143 billion, which means that we are having to borrow nearly £3 billion a week. That equates to £5,700 a year for every household.

The BBC continues to prattle on about those terrible "cuts", as various groups of public sector workers plan the widest series of strikes we have seen since the 1970s. But when did you last hear the BBC tell us that our overall public spending is rising, not falling? When did the Today programme tell us that by the end of the year, our national debt will have soared to £1 trillion, having doubled in six years?

When did it mention that, despite all those closed libraries and care centres, the Government is still having to borrow the equivalent of £100 a week for every household in the land, to pay, inter alia, for the 1,600 employees of the NHS who earn more than the Prime Minister? And that's not even mentioning the 46 BBC executives who enjoy similar perks, including the £834,000 a year we pay the director-general himself.

Forget poor old bankrupt Greece, says Booker. Here in Britain, too, we ain't seen nothing yet. And I'm not entirely sure that penny has dropped.