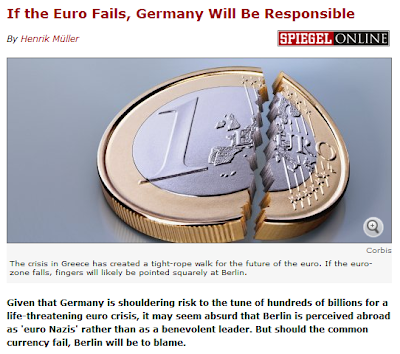 Despite little Myrtle's dose of EVM, we now have Andrew Alexander in The Daily Mail stating unequivocally: "Greece will default on its debts, leave the euro and return to its own national currency, the drachma. This is one of the certainties in an uncertain world".

He then goes on to say, "The decision might be swift or it might be slow, but the question remains when, not whether", exactly mirroring my own position, although he is equivocal about whether Greece's departure from the euro in will lead to economic Armageddon.

Alexander is joined by Andreas Whittam-Smith in The Independent. He says the Greeks can't pay and won't pay, so let them default. It would crash out of the eurozone, re-establish its own currency and suffer a devaluation. Greece would be in a mess, but at least it would be its own mess.

Elsewhere, the Mail had earlier ramped up the crisis with a report that the Greek crisis could cost Britain as much as £336 billion, although the actual direct exposure seems to be round about €14 billion (give or take) – although you get a different set of figures from The Independent.

Meanwhile, Der Spiegel is breast-beating about the euro. It remarks that the German government also seems to care little that the European Central Bank is slipping into serious distress.

It worries about fact that "our financial system" is so tightly interwoven that if part of it fails, we could all fall and then complains that Germany is in an impossible situation. Having "ponied up" hundreds of billions of euros but is nevertheless being pilloried.

Some Greek newspapers refer to Germans as "euro Nazis," and not as a benevolent leading power. The fact that the situation has deteriorated so far does not speak well for statesmanship in Berlin - and that is putting it mildly.

But then does it lament that, if the euro-zone does break apart, it is Germany that will be blamed - because it was the country that could have saved the euro but didn't do so out of short-sighted self-interest. The damage, should it come to that, will be much more than monetary.

Hilariously – and possibly more accurately - Zerohedge takes a completely contrary line, arguing that if Germany is seen as the reason for the collapse of the Euro, it will be branded a saviour, not a villain ... at least by the non-banking population of Europe.

However, while we may enjoy the irony, there is something rather unpleasant closer to home - personal debt. We can rail about nation states, but in the UK, we are the most indebted nation on Earth, per head of population, the total level of personal debt running to a trillion and a half.

Against that, I suppose, Greece is rather small beer – especially when we see the level of default that will follow an economic crash.