The appliance of science (not) 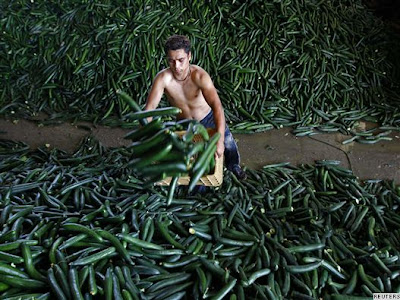 "It's crucial that national authorities don't rush to give information on the source of infection when it's not justified by the science", said John Dalli, the EU's food safety commissioner. "That creates fears and problems for our food producers. We must be careful not to give premature conclusions".

A propos my last piece, several points emerge here. First, in naming the supposedly responsible foods (now said to be bean shoots produced in Germany), strictly, we are not talking about the "source of infection". In terms of E. coli, it is actually the vehicle of contamination.

Secondly, the "rush to give information" is a characteristic of epidemic diseases. The authorities would be crucified if they did not – by the EU commission amongst others. The issue is the flawed epidemiological system which generates false information, presented in an alarmist fashion, which creates a media-fuelled panic.

Instead, we have pontificating a commissioner who has only a slender grasp of science, advised by those with even less grasp – all of them with almost no understanding of the how food scares work, or how to handle crisis publicity. And these are the people in power. No wonder Spanish (and other) farmers are burying thousands of tons of good, wholesome food.

The worst of this is that, from the experience, they will learn nothing because, even now, they do not have the first idea of what they did wrong, and lack the self-critical awareness to find out. That is the real tragedy - not only do they not learn from their mistakes, they have no capacity to learn from them. And thus, in the fullness of time, this disaster will be repeated.