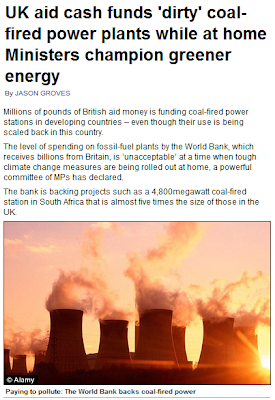 Millions of pounds of British aid money, the Daily Mail tells us, is funding coal-fired power stations in developing countries – even though their use is being scaled back in this country. It continues:


The level of spending on fossil-fuel plants by the World Bank, which receives billions from Britain, is "unacceptable" at a time when tough climate change measures are being rolled out at home, a "powerful committee" of MPs has declared. The bank is backing projects such as a 4,800megawatt coal-fired station in South Africa that is almost five times the size of those in the UK.

We are also told that the World Bank is supporting Indian plans to build nine new power plants, a project which environmentalists have condemned as one of the biggest new sources of carbon emissions on earth. In most cases, we learn, the projects do little to increase access to energy for the very poorest.

Well, what a wonderful thing it is that these people are really on the ball. We did the Indian story in December 2009 and the South African story the following April.

Between the media and the political establishment, there is nothing to choose when it comes to their level of ignorance. They come in years late, feeding off each other, ending up with half the story. They cost us a fortune and then draw the wrong conclusions – usually when it is too late to do anything about it.

If these people had their wits about them (a joke, I know), they would have been on to this issue when it was happening. Now, it is just idle prattle.