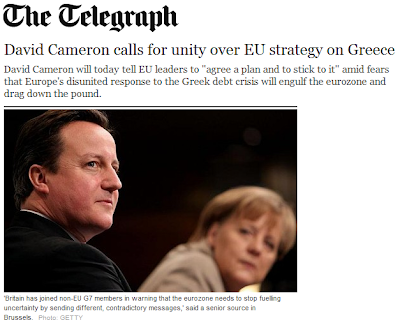 In Money Talks, Michael Campbell interviews financial analyst Greg Weldon, founder of Weldon Financial, recognised as one of the top macro-research firms in the world.

For the "money quotes", Campbell notes that: "What's really bubbling below the surface is this huge need to finance more debt in western Europe and in the United States coming up in the second half of the year when the rubber's going to hit the road". Weldon comments that it's a very dangerous time for global equities:


If you listen to the pop media here in the US about what's happened in Europe you hear a level of complacency and denial, that we are going to be able to bail out Greece and everything's going to be fine. While it allows me to create a business where we dig into the facts and produce research that tells it like it really is, it also makes me cringe. It does such a disservice to the public to put out stuff that is blatantly fraudulent.

In an earlier broadcast, he refers to the structural problems in the euro and in this interview Weldon repeats an oft' repeated theme that the problem goes "as far back as to when the Greek Drachma was incorporated into the euro, a time that we knew the euro was being watered down simply because of the Greek deficit dynamic". A refreshing informality in style does not conceal the level of concern. Says Weldon:


It's coming to a head as they can't continue to kick the can down the road. If we go back to the fourth quarter of '09, when we first started to really focus on Greece, continually officials down there kept coming up with these "bail outs". You know it's like the movie Animal House when the guy is in the middle of the road as the crowd approaching him is about to stampede and he says "remain calm all is fine."


This has been the ECB, the EU finance ministers, even the head of the finance ministers Juncker actually admitted to lying to the public and the media recently simply because they are willing to do whatever it takes to try and maintain the single currency.

I just don't see how that's going to be possible. I don’t see how there's any way out of this. They can't paper it over, the way out is austerity and the public's not going to stand for that. We see the unions rallying in the streets, threatening to blockade parliament and so on and so forth. The next thing is going to be the power company which is saying they are going to start selling off assets to rectify the situation. It's not nearly enough money that they are going to be able to raise.

Against this quality of comment, poor Bruno Waterfield is obliged to waste his talents and skills recording the trivial mouthings of Eurofool Cameron. His input into this growing crisis is to tell EU leaders to "agree a plan and to stick to it", citing the "disunited response to the Greek debt crisis" as the significant issue.

This, of course, ignores the very real schisms in the ranks of the "colleagues", who are torn between perpetuating the fantasy that the euro is salvageable, and the reality that there are structural faults that prevent any solution. What Cameron chooses to call "dithering" is more a reflection of what happens when fantasy collides with reality.

It is a bit rich for the king of the U-turns to be telling the "colleagues" that they should be sticking to a plan, but Cameron is nothing without his hubris. What he cannot do, though, is tell us what plan the "colleagues" should stick to. This is none that will work.

We go back to Weldon on this, who says "it does such a disservice to the public to put out stuff that is blatantly fraudulent". Cameron is perpetuating the fraud. And that is one of the reasons why we are living in such a very dangerous time.